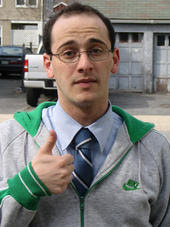 Josh Gondelman and Shawn Donovan begin their trek across the nation this week, playing everywhere from Chicago to Austin, San Diego to Seattle, all in about a month’s time. They’ll kick off their World Tour of America tonight with a show at Mottley’s Comedy Club with a slate of guests – Jon Lincoln, Tim McIntire, Brian Moote, Dan Boulger, Ken Reid, Chris Coxen, and Renata Tutko. I spoke with Gondelman by e-mail about the tour.

How did you decide to do a national tour together?

I have some good friends in a really great local band (The Grownup Noise), and they do a self-produced tour every summer, so that was definitely an inspiration for me. I had the idea a year ago to do a similar thing. Shawn was my first choice to come with me because my rubric was: Who can I call who will leave his/her job on a moment's notice? And Shawn was the first name that came to mind.

Have either of you done extensive road work in the past?

I've been all over New England and down to New York for shows, one nighters and weekends and stuff, but this is my first serious long-term nation-wide trip. It's an excuse to see the country and meet people and get onstage in front of all sorts of different crowds. We've got some adventures planned, too. Salamander hunting with a nature photographer in Chicago, Graceland, riverboat gambling in Mississippi. Also, Shawn is a bigfoot enthusiast, so the Pacific Northwest will be full of mystery and danger.

How did you book the places you’re going to?

The internet has been a great resource. Just Googling cities and contacting people on MySpace out of the blue has yielded some great results. Also, Boston has become a really cool melting pot for comics who started out in different places. Brian Moote was a big help booking shows in Seattle and Jess Mozes who works at the Comedy Studio got us a gig in San Francisco. Also, there are lots of Boston transplants all over who were very helpful. The Walsh Brothers in particular. Lots of guys who went to Emerson are out in California, too, and they were very cool. Mike McCusker was very supportive. We're mostly crashing on couches of college friends. At this point in my life, no one owes me any favors anymore, though. I better not move anytime soon.

What is your mode of transportation?

1999 Toyota Corolla. Mine. I'm picturing it as a cross between the Blues Brothers ("It's dark, and we're wearing sunglasses, etc.") and the Big Lebowski ("They finially did it; they killed my f---ing car.") But mostly we're putting 8,000 miles on a ten year old car. Fortunately we've got a friend who is a comedian and a mechanic who's taking a look at it for us. Comedy is sort of like the free masons sometimes.

What venues/cities are you most excited to play?

We got hooked up with some really cool showcases in Chicago, which is our last stop on the way home. Plus, I've heard nothing but great stuff about Austin and San Francisco as places to spend time.

What do you think you might learn from playing these other cities?

What I'm hoping for mostly is to broaden my horizons in terms of absorbing comedy. Boston is a great community, but I'm excited to see what the conventions are outside of that community. What makes people uncomfortable in other cities? What sorts of jokes are "hack?" I'm curious to see whether mainstream comedy is sort of like mainstream music, in that what blows up nationally is the most commercially viable iteration of a particular style or dialect. I'm excited to get into the nitty gritty of things. And also to see how my act plays all over, for sure.

Will you be trying to pick up shows as you go along, in addition to what you already have booked?

We're already pretty jam-packed, with something like 17 nights onstage out of 28 days away, so it'll be tough to book additional things, but I'd definitely be up for doubling up and hitting a couple of shows on the same night in cities where there's a lot going on. You know, like Oxford, Mississippi.

What will be your first official gig back in Boston after the tour?

The Monday we return, I retake the helm of my usual Monday night open mic at Sally O'Brien's in Somerville. Then I'm at the Comedy Vault the first weekend I'm back (April 10th and 11th), and then The Gas (Friday) and the Comedy Studio (Saturday) the next week. So I'm hitting the ground running.
Posted by Unknown at 9:11 AM