Lamont Price Brings the Fun to the Sweetwater Cafe 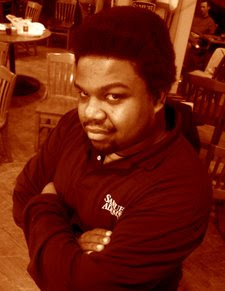 With Wednesday’s “March Madness” show at the Sweetwater Café, Lamont Price is coming up on his one-year anniversary for at the Boston venue. Price has booked shows there every couple of months since last April, taking a casual approach and putting comics he likes personally on the bill. It seems to be working. Price reports that he has had good crowds, and the Sweetwater already wants him to book another show for April.

“This show is strictly to have a good time,” says Price. “I don’t have any rules. Comics will ask me, what should I do? And I say do whatever you want to do. I don’t care what jokes you do, I’m not telling you what to do. There’s no rules here. Let’s just have some fun. If it stops being fun, them I’m going to stop doing it.”

Price will host a mostly local line-up with Mehran, Ed Dominguez (from Providence), Dave McDonough, Daniella Capolino, Sean Sullivan, and Ken Reid. All of the comics are people you will likely see on a bill with Price again at the Comedy Studio or other clubs around town. And while Price will sometimes book an out-of-town comic to network, he doesn’t think much about that aspect. When he says he’s in it for the laughs, he means it.

“Some shows, I’ve had guys I know from New York come down and do time, and I guess that helps me as far as getting booked, share and share alike,” he says. “I’ll go to New York and I’ll have spots because of that. I don’t know if it helps me that much. I just do it because it’s a fun idea. I don’t think it hurts me either. I do it on my terms.”

But don’t let Price’s laidback approach fool you. He has worked hard on his act and to make the most of his opportunities. He has booked more indie film work the past few years, including last year’s Face Dance, produced and directed by Martin writer and producer Topper Carew. “I want to do more,” says Price, “I want to do as much as I can. I’m doing a project coming up with Kevin Bright, the guy who created Friends, doing a little something with him. It’ll be good for my reel.”

Price was also among the handful of comedians who auditioned for Montreal’s Just For Laughs Festival last week at the Comedy Studio (another audition was held at Mottley’s Comedy Club), and gives an honest assessment of what was a well-received set. “I think I did fine,” he says. “I don’t think I destroyed the room, but I thought I did well and I presented myself pretty well. As long as I was me onstage, that’s pretty much all I can ask for, really.”

Price has auditioned twice before, in ’04 and ’05, and not surprisingly, he is hopeful but won’t spend the next couple of months waiting by the phone for his call from Canada. He talked to Jeff Singer, and feels confident that he impressed, but that’s no guarantee he’ll get a sport. “He knows that I can murder, basically,” Price said of his post-show talk with Singer. “That’s obvious.We’ll just have to wait and see what they’re looking for.