Robby Roadsteamer: I Solved Every Miniquest 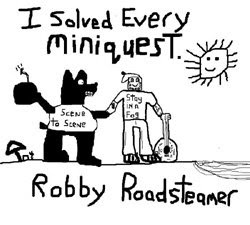 Robby Roadsteamer has officially come through his Nebraska period, recording his new album, I Solved Every Miniquest, with a full band. And that’s not the only change. Miniquest also leaves behind the hard rock mustache rock for a more poppy sound, still heavily influenced by his troubadour shtick for the past four solo albums (released within the space of a year and a half). There’s even a hand-clapping sing-along (“Two Week Maine Vacations”) danceable folk rock (“Silverspoon Artist Girl”).

Don’t worry, there are still plenty of Tekken references, and some songs that reference the music industry, although Roadsteamer (and his need to work menial day jobs) is the main target. The best of these is Roadsteamer’s self-penned Wikipedia entry – “Bury that timecard right in the clock/Go clean up dress shirts at Sears.”

Miniquest has a bit more of the party atmosphere that made Roadsteamer’s earlier band albums so much fun (see especially “When We Hang Out”). Which might have something to do with the camaraderie Roadsteamer has worked to engender in the comedy community for the past several months, resulting in a string of comedy/music shows at rock venues.

The latest of these shows, The Greater Boston Alternative Spring Comedy Fling, happens tonight at the Middle East Upstairs with Mehran, MC Mr. Napkins, Chris Coxen, The Steamy Bohemians, Renata Tutko, Anderson Comedy Group, Ken Reid, and emceed by Shane Webb, with musical guest Chris Keating. Doors at 8PM, cover $8. Roadsteamer has also been giving out copies of Miniquest at the shows, so you may be able to snag one there.

You can see a bunch of ths Spring Fling folks in this video for “I Guess It’s All About” (note Mehran’s performance as “stressed out man on phone”).