Kyria Abrahams Is Perfect, and You're Doomed 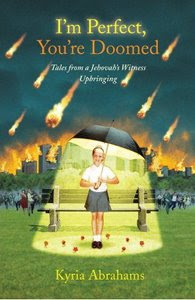 As of today, Kyria Abrahams is a published memoirist, as Touchstone released her I’m Perfect, You’re Doomed: Tales from a Jehovah’s Witness Upbringing. The book is deeply funny and deeply personal, delving into how her faith drove her to suicide attempts and a loveless marriage. Hard to pull laughter from that subject, but Abrahams does it with relentless sense of self-deprecation and awareness. Of course, Abrahams is used to getting laughs from her time in Boston, performing at The Comedy Studio and other venues around town. She answered a few questions about the book and Boston comedy from her New York apartment by e-mail while recovering from a root canal. (She'll also be blogging at the Powell's Web site this week).

Do you get to perform stand-up much any more?

I do want to get back to performing regularly, but I took a break to write the book and eventually fell out of the loop. I also realized that I liked the solitude of the writing process. I love doing standup, but it's also very nice to go home after work and eat dinner in my kitchen, instead of running to Brooklyn to perform for five disinterested hipsters in the back of a hat store/bar/arcade with free pizza. I got tired of forcing comedy on people who didn't even know there was a show going on. It felt too desperate.

Do you have any particularly fond memories of playing Boston and the Comedy Studio?

Hell yes. Fond, traumatic, life-changing, hungover - you name it! That building and the people inside it changed my whole life, as did the waitress at the second floor bar offering vodka and Kool Aid shots in a test tube and, my personal favorite question: "Meat on a Stick?"

Hosting the Friday night show with Piston Honda is probably my fondest experience, working with The Walsh Brothers, Dan Newbower and James Patterson. We were five incredibly talented comedians, none of whom could get our acts together long enough to produce anything anything of substance.

And, of course, I'm sure you remember when Sam Walters kidnapped you as part of a publicity stunt for our comedy troupe WAKKA, which I believe stood for The Warring Komik's Army. That was... awesome?

I think the bottom line is that Rick Jenkins gave us free reign to be horrible and to forge life-long friendships. I actually have a painting of the Hong Kong hanging above my desk.

Did your stand-up experience help you with the humor in the book?

I don't know if the craft of standup was important, but I think the experience of bombing definitely helped. Bombing kinda makes you a better joke-writer, because you want to avoid the soul-crushing feeling of silence. I think every standup has had the experience of thinking a joke was gonna kill, and then realizing that it's definitely.... not. But if you never perform in front of people, there's no way to hone the skill of self-preservation, you're just stuck in your own head. That's a bad place for a comic, because everything up there seems brilliant.

Where did the idea to write a memoir come from? Was it something you always had in mind?

I was thinking about doing a one-woman show, or maybe just adding some jokes about it to my standup routing. I finally realized that I needed too much backstory and explanation. I couldn't make jokes about it, because no one would understand what I was talking about. The memoir was the only form that really met the needs of the story.

The book is funny, but also often brutally personal. Were you hesitant at all about revealing so much in public?

Not really. I'm always very open about my life, especially dumb mistakes I've made. Someone recently said that I "Live life out loud," and I liked that. Everything in my book is there to further the understanding of who I was as a child, which will hopefully give people some understanding of what it feels like to grow up as a Jehovah's Witness. I was excited to have the opportunity to put my life out there for this reason. And memoirs are supposed to be revealing. Unlike, say, describing my attempted suicide while standing around the cheese plate at the company Christmas party. There's a time and a place.

How did you approach the tone when talking about the rituals and your experience as a Jehovah’s Witness? You’re obviously mocking the founding principles of the religion, but you’re doing it by mocking your own attitude about it at the time, which seems like a tough line to walk, between preaching and self-deprecation.
I have a tendency to be very judgmental, so I made a conscious effort to reign that in. I just didn't think a nasty, sarcastic tone would make for a good book. Maybe that's why I was so hard on myself at times, because my character is, in a way, a symbol for all Jehovah's Witnesses. At the same time, I wanted to remember that these are real people with real lives, something that's often overlooked when we make fun of religion. It's easy to stereotype religious nuts, it's hard to see them in shades of gray.

Have you gotten much feedback from people who were in the book? Is there anyone you’ve purposefully not sent the book to preview?

Only from a few people, but for the most part, people have been very quiet about the whole thing. I didn't send copies to my parents, of course. It's apostate literature, and I was afraid the Fed Ex truck would burst into flames.

Where do you stand on religion now?

I'll be honest, I really don't like religion. The idea of organizing access to God is very distasteful to me. I just don't think it's healthy to go to church. It poisons the experience and creates all kinds of drama that has nothing to do with God but has everything to do with what color robes mean you're the most important person in the room. Organized religion is all about ego to me.

At the same time, I'm the kind of person who prays and meditates almost every day. I have a higher power in my life, and I also don't care if anyone agrees with that concept or not (so save your spiel, athiests!). I don't really feel the need to debate it. It's just my personal relationship with God, in the same way that I have a favorite deodorant and I sleep with socks on. It doesn't affect anyone but me.
Posted by Unknown at 5:31 PM

Great interview, and a really great book - I just finished it and highly recommend it - could not put it down.

I've recently started the book, it is wonderfully written, and I am looking forward to finishing it...I was raised in worldliness, and at 27 came to the Lord, not via JW. It is sad that Kyria went through all of that, and is gun shy of religion. After 20 yrs. now it is the best decision I have ever made...The (real) truth CAN make you free...I wish you well Kyria...C.T.M.