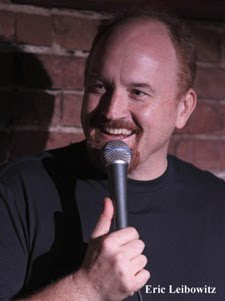 Nothing in Louie’s life can be easy, not even a simple doctor’s appointment. Tonight’s episode opens with Louie talking about his body, and his advice on how to have the body you want. “You just have to want a shitty body,” he says.

Louie’s doctor is played by Ricky Gervais, a master of humiliation, and he’s in fine form giving Louie a physical. Even a routine check-up can be nerve wracking, undressing in front of strangers or, worse, a guy you know who happens to be a doctor with an overdeveloped sick sense of humor. The last place you want to encounter slapstick comedy is during a rectal exam.

I’ve probably given too much away already, even for an episode preview. But I could probably describe exactly what happens and it wouldn’t dull the impact of Gervais’s performance.

This episode is again split into two parts, the second of which centers around a political argument between Louie and Nick Di Paolo. If you know both comics, you know their views are sharply opposed, but you also know they’re great friends.

You get to see both onstage, both doing politically themed comedy. Louie has a wonderful riff on the term “Indian Giver,” after which Di Paolo rips on Obama and white guilt. Sitting around after the show, the argument boils over, and a physical fight erupts. Watching two comedians fight is pitiful experience, and after an accident, they wind up in the emergency room.

Similar to episode two, this episode shows how volcanic friendships can be, with conflicts over real world subjects, and how personal bonds will trump those every time. Louie and Di Paolo wind up cracking each other up and taking aim at the people around them in the emergency waiting room.

Their walk home feels just as genuine as the poker game scene from episode two, which also starred Di Paolo. That’s because there’s real history there, and that’s what’s showing up onscreen. Louie and Di Paolo both have Boston roots, and they’ve played the same rooms for the same people, and shared their ups and downs together. You could never in a million years find that kind of chemistry through random casting.

There’s a one-two punch developing with Louie. Two segments, one that’s way over the top, awkward, and hilarious, and one that’s equally funny, but more real. You never know which one you’re going to get first. But you can always count on the funny.
Posted by Unknown at 4:35 PM