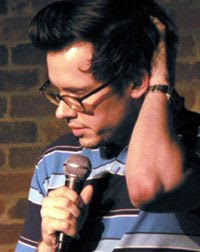 The Comedy Studio’s Comic in Residence program is made for comics like Matt Donaher, known to comedy audiences as Matt D. He’s been doing comedy for less than two years, and is already one of the scene’s sharpest up and coming comics. His deadpan and penchant for one or two line jokes has earned comparisons to Steven Wright, and a friend of mine, Derek Gerry of The Whole Truth on WMFO, has compared him to Woody Allen.

He’ll be playing at the Studio Tuesday through Sunday, every night through the month of June.

I started doing comedy in February of 2009.

I get to play the Studio about twice a month.

Myq Kaplan without a doubt. Steven Wright is also a favorite of mine, as well as Jonathan Katz. Sometimes it's hard for me to separate 'people I really enjoy' and 'influences,' but those are the guys I listen to from Boston and say, "I want to be like that someday."

I am usually out every night, thankfully there are enough places to do that in New England.

Work on new stuff and trying to solidify a seven minute set, so a mix of both. I'm glad you had that option ready.

I'm not sure what I expect, what I hope to get is five more minutes of jokes, and be strong enough to kick the show off to a good start every night. I do expect to have a lot of fun though.
Posted by Unknown at 8:59 AM

Matt D is probably my favorite comedian that I've met thus far in the Boston scene. After four months of doing stand up, it's already so strange for me to meet a comedian that isn't an egotistical bastard, but he's also genuinely hilarious to boot. Another rarity, I've found.

Congratulations to Matt on the Studio residency and I look forward to surely seeing him on television in the near future.

Matt D is one of my favorite writers on the scene and he is an unbelievably nice guy.

He that travels in theory has no inconveniences; he has shade and sunshine at his disposal, and wherever he alights finds tables of plenty and looks of gaiety. These ideas are indulged till the day of departure arrives, the chaise is called, and the progress of happiness begins. A few miles teach him the fallacies of imagination. The road is dusty, the air is sultry, the horses are sluggish.