Times like this, the comedy community seems small. By now, many have heard of the passing of Frank Ahearn, longtime Comedy Connection booker and Tommy’s Comedy Lounge co-owner (with partner John Tobin).

Ahearn had a massive stroke in December, but seemed to be recovering this spring, when two benefits were held for him at Tommy’s. Those two shows were packed with local comedians appreciative of Ahearn’s influence on their careers. Gary Gulman headlined one. Tess Rafferty came back from Los Angeles.

Tony V., Steve Sweeney, Harrison Stebbins, Joe Wong, Joe List, Dave Russo, Jimmy Tingle – all of them and more came out to perform. And the crowd was filled with comedians that could have made up another two or three high impact bills.

Ahearn took a turn for the worst, though, and was given his last rites Thursday. He passed Monday morning at South Shore Hospital. Longtime associate Paula Murphy sent the news. She ended with this, “We'd all like to think he had a tee time with Knoxie,” a reference to Kevin Knox, who died in November after a long battle with cancer. The two were good friends.

There will be plenty of tributes in the coming days, but if you catch this in time, tune into WTKK at 6PM tonight to hear former Comedy Connection waitress Michelle McPhee give hers.

This is a photo of Frank Ahearn in Las Vegas that Murphy sent out earlier today. That’s him right up front in the blue shirt, with Knoxie right behind him. 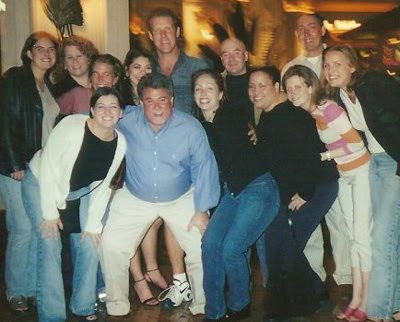 You definitely have a great post over here! I am starting to understand better how making money using blog works. Thank you.