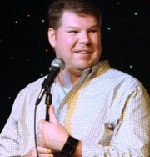 When WickedLocal.com wrote about Keenan, they included this quote from one of the masters, Steven Wright, "Hilarious. I tried to remember a joke he did so I could tell him I liked it, but then he'd do another one that was funnier and I forgot the first joke I wanted to mention to him. Then it happened again and again."

Lucky you, if you want to see what Wright found so funny, you'll have your chance tonight at the Kowloon on Route 1 in Saugus. Keenan is on the bill with headliner Jimmy Dunn (the cab driver in the Olympia Sports commercials, for the uninitiated).
Posted by Unknown at 1:00 PM