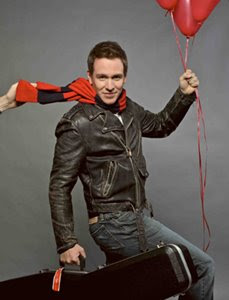 Stephen Lynch will be in town tomorrow, playing the Comedy Connection Wilbur Theatre for two shows I am told are now sold out (never hurts to check Ticketmaster if you are still looking for tickets, though). Not a bad kickoff for his Comedy Central Live: 3 Balloons Tour, which will eventually take him across the US and into London, Ireland, Sweden, and Holland, with more dates still to be announced. And that's before his new album, also named 3 Balloons (coincidence?), hits shelves on March 24.

The album can get a bit raunchy, with tunes like "Medieval Bush" (self-explanatory) and "Hallelujah," in which Lynch professes his thankfulness for a certain part of the female anatomy. Lynch is coming off a Tony-nominated run in the title role of The Wedding Singer on Broadway, and getting right back to work -- he has a new DVD and a new special due by the end of the year. I caught up to him by e-mail this week.

So when can we expect your children’s album?

I don't need to do a children's album. I feel my records are appropriate for any age. Next time your baby is crying and won't sleep, try humming a few bars of "Waiting for My AIDS Test to Come Back," for example. Your child will be both entertained and lulled into sleep.

3 Balloons goes even a bit further into the scatological – did you have all of this to get out of your system after having to be a bit cleaner on Broadway?

I don't think this album has much in the way of scatological humor at all. It covers a wide array of topics, from those bad-ass Peanuts kids to my experience as a grade school teacher to Marvin Gaye's diary entries. I certainly felt a sense of freedom in what I could write having done squeaky-clean Broadway for a year, but as is always the case, I never decide to write for shock value or gross out value. It's what i think is funny. By the way, I did manage to sneak a line about "clubbing baby seals" into The Wedding Singer, so it wasn't all bad...

I can hear “The Ballad of Scarface” or “America” playing on college folk stations or at coffeehouses with no one quite noticing the lyrics at first. Do you listen that genre of folk music?

I've always loved the folk music. Bob Dylan, Joni Mitchell, Pete Seeger, It's the simplest way to tell a story, and sometimes the most effective. So it works for what I try to do too. Plus, it's easier to write jokes in that style, as opposed to say, Pantera or Yes. Although "Roundabout" IS hilarious...

“America” almost seems heartfelt at times – is that something you think about? Trying to write something you actually feel sometimes, while still going for the joke?

I wrote "America" in London a couple years ago, when the world's view of our country was probably at its worst. The more hopeful ending came as a burst of inspiration after the Presidential election. That song is the closest thing to sincere that you'll find on one of my records. Well, that and the AIDS test song.

Have you ever performed Leonard Cohen’s “Hallelujah?” Maybe a medley of yours and his?

That medley would be 73 minutes long. But very profound. And moving. His is a song about spirituality, sin, regret, repentance, and longing. Mine is about tits. 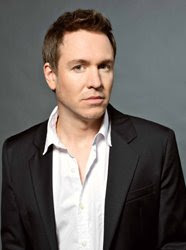 You used fan videos to help promote the show in your newsletter. Do you approve of people posting their videos of your shows online? Is it something you explicitly condone?

I love the fact that everything is online. It's like free advertising. I just did sold out shows in Scandinavia, where I've never been on t.v. or the radio, and I can only credit YouTube for the fact that anyone knows any of my material over there. It does get a little weird when you perform a song for the first time, and the next night people are singing along to it. Very creepy.

Did you take anything valuable away from having been on Broadway with “The Wedding Singer?” Did you find a different audience there?

The first few months of shows I did after The Wedding Singer brought a few curious Broadway fans, most of whom left after the first song. Let's just say that I don't have the same demographic appeal as "The Lion King."

Were you surprised by the Tony Award nomination?

What are you insinuating? That I SHOULD have been surprised? How dare you? No, I wasn't surprised- I was expecting the Goddamn nomination! And I should have won, too! Son of a Bitch Jersey Boys! Ok, I was surprised.

How did you approach the arrangements since you had a full band to work with this time?

I just played them like I play them live onstage, then added other instruments in to fill out the sound. That way I hopefully avoid overshadowing the comedy. I actually think the other instruments make some of the songs funnier. Especially that crazy slide whistle- always hilarious!!! there's no slide whistle.

Are you bringing a band on tour?

No, but I will be performing some of the songs karaoke style to a track with full band and orchestration. This allows me the freedom to move around the stage, go out into the audience and do quick bong hits backstage during a song.

Is this the same show that’s going to make it to the DVD?

What are the “multi-media” elements of the show?

I'm still working on these, even a couple days before the first show. It will most likely consist of short videos, slides, images to accompany songs as I play them live, etc.

Does having Comedy Central behind this tour help get you into venues you haven’t played before, or help you get more people in the seats?

Every time one of my specials air on Comedy Central I see an increase in ticket and record sales, so yes.

Your father has a folk trio in Saginaw – do you ever play together? If so, what do you play?

We usually sit around the piano and do Klezmer music. And Lionel Ritchie covers.
Posted by Unknown at 5:19 PM