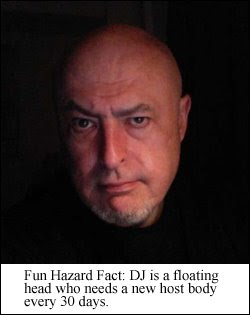 When DJ Hazard comes to Boston from New York to play the Comedy Studio Friday (for a guest spot) and Mottley's Comedy Club on Saturday, it won't be the first time he has made that trip. Hazard is a Boston comedy legend, part of the Ding Ho crowd and mentor to many a local comic over the years, but he was born in New York City. He came to Boston as kid and wound up staying.

This is DJ's story about coming to Boston, with a tiny bit of embellishment about the Blue Line and Hazard's subterranean subjects. And we here (okay, I, here) at FunnyGrownHere.com are proud to present...

Park Your Grok in Fraggle Rock
By DJ Hazard

Are we alone? No one followed you, right? Okay, I have a confession to make. I’m not from around here. I was born in New York City.

My family moved here a year after I got out of high school. I had no idea what Boston looked like. I knew Boston existed. I knew the Red Sox came from somewhere to play Yankee Stadium. I figured there were some buildings on a dock where Carl Yastrzemski, Julia Child and the Kennedy Family all lived together.

I was leaving a playground of sixty story buildings and all night subways. At least I was also getting my very first plane ride, which turned out to be the next best thing to losing my virginity. Some thirty minutes later, the pilot announced that we were approaching Logan Airport and that, if we looked out the window, we could see the Boston skyline. He forgot to mention that I was sitting on the wrong side of the plane. All I could see were miles and miles of little wooden buildings, empty lots and the vast Atlantic. I thought I was being taken to live with the Pilgrims.

On top of that, my folks had rented an apartment in Winthrop and our cab ride went right from the airport to the middle of what I had seen from the air. I hid in my room for three days. Some kindly neighbor lady, bless her soul, asked my Mom if I wanted to see ’the city’. She explained that all I had to do was go down to the corner and catch some bus to some place called Orient Heights and get on the subway. I found the subway and tried not to panic as each of the following stations heralded a further plunge into my Green Acres nightmare.

Wood Island: From the frying pan into the fire. This must be where they get lumber for their cabins.

Airport: Hmmm, perhaps I could stow away on an airliner and get back to civilization.

Maverick: What the hell was this? Time Travel? Now I have to deal with cowboys?

Aquarium: Some guy and a fish tank. Great.

State: State of what? Solid, liquid, gas and plasma? Was I now dealing with oblivion on a sub-atomic level?

Government Center: I figured if it ain’t here, it ain’t nowhere. I got off the train and trepidly walked upstairs.

The rest is history. As you all know, the scary-looking but kindly Lava People surrounded me as soon as I emerged from the T kiosk. They made me their King and began construction of the Hancock Building as a token of their loyalty. I told them that if they really loved me they’d renovate Quincy Market into a tourist Mecca, transform the Commonwealth Pier into the World Trade Center and put the Orange Line underground. They complied.

Life was good as the omnipotent ruler of Boston’s Subterranean Mutant Population. At least until a couple of years ago, when they took it upon themselves to dig a huge tunnel under the waterfront as a surprise birthday present for me. I knew they meant well, but I guess they figured out that they screwed up. Good Lord, the poor little fellows were so depressed. I told them that it was okay, but they kept trying to make it up to me. They replaced Boston Garden with the Fleet Center. They chucked IMAX Theatres everywhere.

The one thing they couldn’t accomplish was rebuilding Fenway Park. It seemed like their every attempt was met with a force far more mysterious and powerful than their own Lava Mutant power. That force was called Red Sox Nation.
Lava People… Red Sox Nation… Lava… Sox…

The push and pull threatened to pull the very fabric of Boston apart. A truce had to be declared for the sake of my adopted city, its inexorable fan base and my Empire of Underground Minions. I asked the Lava People if there was something they could do that could make Red Sox Nation happy, leave Fenway untouched and serve as an apology for their mega-flop burrow beneath a perfectly good Southeast Expressway.

A few days later they returned and said that through ways I wouldn’t understand, not being a real Lava Person and such, they could make the Red Sox win the World Series. I said go for it and, in one fell swoop, never had so many had so much to revel about.

Personally, it was right up there with when I found that loose brick behind the Union Oyster House that spits out gold coins. But that, my friends, is another story.

Video of Hazard at the Boston Comedy Festival


And check the music links on Hazard's MySpace. He has posted some rare and lost tracks along with tracks from his new album, Man of Hazardium.
Posted by Unknown at 10:44 AM