Maz Jobrani is "Brown & Friendly" at the Berklee Performance Center

Maz Jobrani is probably best known from his role as Gourishankar “Gary” Subramaniam on the ABC sitcom Knights of Prosperity and from the Axis of Evil tour with fellow comedians Ahmed Ahmed and Aron Kader. With his “Brown and Friendly Tour,” which comes to the Berklee Performance Center Saturday, he steps out on his own as a stand-up. His social commentary is anchored by his experiences as an Iranian-American, but his passion is more joyful and energetic than resentful or exclusionary.

I caught up with him by e-mail to talk about his various film and television projects, and the photo he sent out to his newsletter singing with a band. 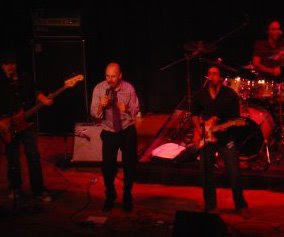 What’s with the pictures of you singing? Are you pursuing music now, as well?

That’s me singing with the band Kiosk. They’re a group of Persians who have a Dire Straights sound to them. They’re more like world music. Really cool – check out www.kiosk-music.com. Anyway, I’ve always wanted to be a rock star. Every time I see Bono singing to 50,000 fans I think, that looks fun. So the guys in Kiosk let me close out the show singing with them to 1,100 people. It’s not 50,000, but it’s a start.

Will the Axis of Evil Tour return, or has everyone moved on from it now?

I think we’ve all moved on. We had a good run and it helped us become better known around the world. It’s the natural progression for a comedian to start touring solo and to grow the act.

Do you think the tour helped change perceptions of Middle Easterners at all, the way you hoped?

Absolutely. I remember reading a blog after our special aired on Comedy Central and it was on a conservative Web site. The guy actually said to another guy, “I never knew these people laughed.” If you think about it you’d never seen a group of four Middle Easterners on a stage telling jokes in English and laughing. Usually we die in most of the things you see us in on TV or in film.

How did the tour name “Brown & Friendly” come to you?

Well, Iranians are actually white – we come from the Caucuses, so we’re really not “brown.” However, we, Arabs, Indians, Pakistanis, and many other groups are seen these days in the West as being part of the same people. The best way to describe these people is “brown.” So I figured I’d accept this categorization of me, but add the word “friendly” at the end to counter the image we have in the media. Bascially saying that we’re not all bad; as a matter of fact, most of us are friendly and good.

You have a certain energy and movement onstage that reminds me a bit of Howie Mandel’s early days – was he an influence on your comedy at all?

It’s funny you should say that because he wasn’t that big an influence. I was a fan of his, but someone like Eddie Murphy was a bigger influence when I was a kid.

Then when I got into stand-up I think I looked at guys like Richard Pryor who were talking about personal experiences and commenting on society. I hadn’t heard the Howie Mandel comparison until after our Axis of Evil special came out. Someone pointed out that my energy and the use of my hands on stage reminded them of Howie Mandel. I watched it again and realized that they were right. Who knows, maybe he influenced me subliminally. I just think it’s me being really excited on stage and trying to channel my energy. If you watch my legs on that special they’re constantly bouncing back and forth like I’m boxing or something. I’ve even had people think I was on drugs during that taping and nothing could be further from the truth. I was just amped to be shooting that special in front of all those people. The stage and crowd get me excited.

Are there any influences fans would be surprised by?

Have your parents accepted your career yet? I know when last we spoke, you talked of the generation gap in context of show business, and it seemed like there was some interesting friction there.

They started accepting my career one they saw I could make a living doing it. Ultimately, they were just worried for their son. “How is he going to buy food being a clown? He should’ve been a lawyer.” At one point, my mom even suggested I become a mechanic as a back-up – “People need to fix their cars. You’ll be needed.” Now they’re huge fans. My mom comes over from time to time and grabs from my t-shirts I’ve made up with sayings from my show. “I need a small for my neighbor and two mediums for her son.” She’s basically giving away my whole stash.

Have you performed much in Iran? If so, how is it received?

Never performed in Iran. We did Dubai, Abu Dhabi, Beirut, Cairo, Amman, and Kuwait with the Axis of Evil. That was really cool. It was amazing to do shows in English in the Middle East and see that everyone got everything. With the Internet they know more about America than Americans know about America. I didn’t make it to Iran though. I would love to, but I think under the current regime it wouldn’t work out too well. You might never hear from me again.

Now that you’re doing theaters and bigger rooms, are you able to leave behind some topics you weren’t really happy covering in the clubs and grow a bit?

Well, I’ve always tried to do material that meant something to me. If I can’t connect with it then I can’t do it. There was a time, though, really early when I would do bars. Those were the worst because people weren’t there to hear your jokes on the Iraq War or on the economy or anything that really mattered. They wanted tit jokes. So I was forced to write a few tit jokes. Thank god I don’t have to do those anymore. (By the way, in case you’re wondering what the jokes were, they were more statements that got the crowd to go wild with cheers – things like “Who likes tits!?” Crowd goes wild!).

How does humor fit into Iranian culture outside of the concept of stand-up comedy?

Iranians are big on humor. Every time you go to an Iranian party someone will have the latest jokes out of Iran. Our jokes tend to be provencial and make fun of other provences. It’s the equivalent of Polish jokes in America. Iranians love to laugh.

What became of the pilot we spoke of about an Iranian man living in LA?

I think you might be talking about the film I had written called “Jimmy Vestvood: Amerikan Hero.” Basically an Iranian Pink Panther. We’re trying to raise funds for that. As you know now a lot of people have funds these days so it’s been a bit of a challenge. I did sell a TV show to CBS, though, based on my stand-up last year. I wrote it with Spike Ferensten (Talk Show with Spike Ferensten and writer on Seinfeld) and Chuck Martin (writer on Arrested Development). Anyway, the script was bought, but it didn’t go further than that. I think it’s a tough sell to have a show about an Iranian on TV. The funny thing is that there’s shows about vampires on TV, but not about Middle Easterners. I guess you could conclude that vampires have a bigger demographic than us.

What is your character in Overnight?

Overnight is an independent film I shot last year. It’s about a few stories on an overnight flight from L.A. to New York. I liked it because I got to play a Middle Eastern man from the U.S. who’s on the plane with another Middle Eastern man. People keep looking at us as we walk onto the plane and my character is really bothered by this. My friend, the other Middle Easterner, isn’t as bothered. As the flight goes on some guy confronts me and asks me what I’m up to on the plane. By this point I’ve had it and freak out revealing to him and the other passengers that me and the other guy are actually a gay couple going home after getting married. It was a nice twist and a fun film to work on.

What else do you have coming up?

I’ve got a recurring part on a new ABC show called Better Off Ted. That comes out in mid-March. I continue to tour and will release the DVD from this tour later this year. We also hope to sell the special to Comedy Central or HBO. I continue to pitch TV shows based on my comedy to other networks. Maybe I’ll make it about a Middle Eastern vampire living in L.A. Maybe then, they’ll listen.
Posted by Unknown at 4:21 PM