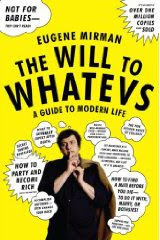 Mortified is back in Boston tonight, this time at Mottley’s Comedy Club. The show features people (sometimes comedians, sometimes civilians) telling embarrassing stories from their childhood. Show starts at 8PM… News from Eugene Mirman. Mirman looks to have a busy February. He’ll be touring in support of his new book, The Will to Whatevs: A Guide to Modern Life, which comes out February 10. He’ll be reading from the book, which Zach Galifianakis likens to “having a tiny Eugene riding on your shoulder and whispering his advice in your ear,” February 25 at Brookline Booksmith. Mirman is also back on Flight of the Conchords, which kicks of Season Two on HBO January 18th, and on a new live action series on Adult Swim called Delocated, in which he plays a Russian hitman and stand-up comedian. That premieres sometime in February… Erin Judge and Ailin Conant will bring their show, The Meaning of Wife, to the Comedy Studio February 2. The show is an exploration of marriage in both a modern and historical context (and, for Judge and Conant, in a personal contect). Proceeds from the Studio performance will benefit arts programs for children in Rwanda ... and Dan Crohn will bring Doug Stanhope to the Hard Rock Café May 15. Sean Sullivan will host, and Crohn and Dave McDonough will also perform.
Posted by Unknown at 11:58 AM

I agree with that..
Todd DiRoberto
http://www.emediawire.com/releases/todddiroberto/calebwickman/emw2553694.htm