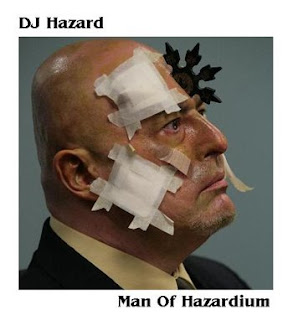 DJ Hazard is one of the founding fathers of Boston Comedy. He was there when the Ding Ho was swinging, not only performing, but helping out with the creative end of promotions and even writing the theme song. For his new CD, Man of Hazardium, Hazard pulled from recordings from his past 20 years in comedy, including live bits and music. It's his third album, if you include the out-of-print Lock Up the Planet When You Leave, and a CD he was selling at his shows last year. He’s now doing stand-up and acting in indie films in New York City, but look for him next month at Mottley’s Comedy Club.

What time period does this CD cover?

Why did you decide to use bits and pieces from that period instead of just going to a club or a theater and doing a full set?

I don't feel like I had a 'perfect' set on film or sound. A lot happens during 45 minutes. A lot happens with different crowds and their reactions to the same joke on different nights. I call this macropsychodynamics. I gave up trying to figure people out. I just try to exist with them until the mother ship comes and gets me.

It also would be lopsided to have this 45 minute set, then a whole bunch of studio sessions. This way, it's a little more broken up. Like a collection of short poems, maybe. Yeah, I think I'll stick with that answer, Meredith.

Will you release the last album on CD Baby now, too?

Nah. It would be a rip off, since the best parts of the last CD are on the new CD.

Do you think you’ll ever rerelease Lock Up the Planet When You Leave?

Not in the least. LUTPWYL was actually a debacle. I was terribly mismanaged and misguided while making LUTPWYL. I hear there's a cache of unsold albums somewhere. I never made a dime off of that project. Fortunately, it was financed by somebody else, so I didn't exactly lose money either.

What’s your favorite bit on the album?

That part where I say that thing, y'know?

How much of this material have you retired?

Other than the MacGuyver bit? I also don't know why I went with that spelling of MacGuyver/MacGyver. The "Hazard History" tracks are bookmarked that way as a subtle hint that they're just old chestnuts. Iran-Contra, Hinckley shooting Reagan, Elton John regifting his Marilyn Monroe song for Princess Diana- you pretty much ain't gonna see these in my set this weekend.

Was it a sentimental choice to include the Ding Ho Song?

No, not at all. I would have omitted it if not for the documentary When Stand Up Stood Out. Enough people have seen that film and come up to me to talk about the film. I wanted Man Of Hazardium to make sense to anybody who listens to it, and the Ding Ho Song now has enough cred to be more than an ancient inside joke.

You once told me people think you’re a prolific writer, but part of that is having a few decades worth of material to dust off. Do you ever find old stuff going through tapes or video that you want to add to your current set?

Oh, yes, for sure. I believe Tony V. once said to somebody that I've forgotten more material than other comedians have. I look at old note books that I've manage to spare from my artistic purges, but most of the notebooks are just pages and pages of 'bullets', one word names that comedian have for entire bits.

I have about three hours of video that I've hung onto, spanning three decades, different looks, different eras, different head spaces. I think at one time I was toying with the idea of making a mockumentary about myself, as if I was dead or disappeared or something. I think I decided that was either too ghoulish or egomaniacal or stupid or something.

How do you work the songs into your average set? They seem to me more a part of your recordings than your live show.

I'm actually pretty concise about the stand up/music proportions of my set these days. It's about 25 minutes of stand up, 20 minutes of music. I don't do a lot of parodies anymore, except for "Untie My Ankles," as the crowds would probably tar and feather me if I didn't close the show with that, and a Springsteen piece, because people come up to me and say that's the most frighteningly dead-on Springsteen impression they're ever seen/heard.

On Man Of Hazardium, I do Bruce as he might sing "I've Been Working On The Railroad." Live, I have him do "Take Me Out To The Ball Game."

"Railroad" is sung the tune of "Born To Run," "Ball Game" is a parody of Meeting Across The River. I LOVE doing "Meeting Across The River" live, as it's a deeper back and lesser known Springsteen composition. I see those who know the song, I see their eyes light up and they REALLY get the joke. For everyone else, it justs stands on its own as how Bruce would sound turning a lively song into a dark and haunting epic.

"Ankles" and "Ball Game" are the only complete songs I do in my live set, at least usually. The rest are parts of songs I wrote. I don't think people want top sit through 10-11 whole songs at a comedy show. At least not my comedy show.

What’s on your plate as far as film work these days?

I have some webisodic things in the oven. Nothing to report about yet, but I'll let you know.

My comedy/acting buddy, Mark Riccadonna, and I recently did what we call our first 'Ballywood' movie. It's not the traditional singing and dancing extravaganza. It's actually a very well shot and artistic short psychological thriller. A two man cat and mouse, if you will.

If you watch episode 4 of this season of 'Damages' on FX, I'm one of the convicts in the prison.

If you watch the very last episode of Battlestar Galactica this year, I have a love scene with all the Number 6 Model Cylons at the same time.

Okay, I lied about the last one.

Blackballed: The Bobby Duke Story (directed by Brant Sersen) and Bourbon (directed by Adam Woodworth are both definitely out on dvd... along with When Stand Up Stood Out, of course. Cold Calls (directed by Jack Daniel Stanley) is doing the fest circuit as we speak, but is slated to be viral online at some point.

The Tourist (directed by Kelly Knudson) is still in post production, but I heard there's a working copy now. It takes place in the 70's and Kelly went so far as to buy 1970 film stock from some crazy warehouse so that it actually looks and feels like you're in the 70's. He's been lovingly and painstakingly crafting this film for over a year since we wrapped shooting.
Posted by Unknown at 12:51 PM

Sweet man, I'd like to meet him. I did briefly in Stratford CT Saturday..Deb
Filazima@yahoo.com