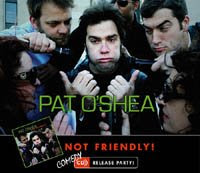 Pat O’Shea returns to Boston this week with a new CD, Not Friendly, and spots at Mottley’s Comedy Club Thursday and the Comedy Studio Friday and Saturday. O’Shea left Boston in June of 2002, and since then, has apparently sharpened his sarcasm, if the CD is any indication. Like some of the best comics, he blurs the line between storytelling and pure joke telling, skepticism and self-deprecation (especially in regards to his muttonchops – you may recognize him as a bartender from the Titanic or as the guy who looks like Wolverine and harasses young women asking for the time). He is appealingly, maybe even affably, disgruntled. You can find news about the CD and his schedule on his MySpace page.

When did you first start comedy? What was your first time onstage?

Dec 23rd,1997.It was the "graduation", if you will of this comedy class I had taken at BCAE, where you had to perform a five-minute set in front of an audience at the Comedy Studio.

What do you think you gained from coming up in this scene?

Boston was great because you didn't have to worry about industry showing up when you weren't ready, and you could just work on your act.

What drew you to New York?

Industry,mostly I guess.I remember talking to Loius C.K. at the Comedy Studio one night circa 2000,and I asked him how long should I wait to move to New York, and he said"four years".I took it as gospel.

Boston and New York are both sarcastic cities. I was thinking about that listening to your Brooklyn Bridge bit. Is there a different quality to that sarcasm in both cities?

Bostons' is a little more subtle, whereas New York for the most part is more in your face with the sarcasm.Germans don't get sarcasm, did you know that?

Was the audience at the CD taping mostly people you knew, as you mention on one or two of the tracks?

It was about half and half probably, although my friends, most of which had never seen me, decided to sit up front.Also, I noticed with a lot of these things, comics make up a good amount of the audience which was not the case with my show at all. I think there were like two there. I promoted it pretty heavily, so it sold out fairly quickly, and a good amount of people were not let in.Wow, I sound like a big shot, don't I?

Was that what you were hoping for, or is it better to make a crowd of strangers laugh?

While I did know a majority of the folks, there were about 20 or so I had never met, and they seemed to enjoy it.I just wanted people to laugh.I didn't really care if I knew them or not.

I hear a bit of Patton Oswalt and Dave Attell in your delivery – do you consider either of them influences?

Have you seen Mottley’s yet?

What is your age?

Is it tougher to get noticed as a comic in his late 30s in New York? Seems like there’s a certain limbo in between the younger 20-something comics just starting out and the bigger name headliners.

First you ask me my age, then you ASSUME I'm in my late 30's.Bastard!YES, as with anything associated with the entertainment field, it's very hard to make a name for yourself with the words"late 30's,early 40's"attatched, especially if your a woman, which I am not at the moment.Although I think comedy is a little more forgiving with the age thing than say acting or music.I was in the music business for 12 years before comedy, and it's even more shallow than the comedy biz.Just look at American Idol.O.K., I'll get off my soapbox now.
Posted by Unknown at 3:51 PM