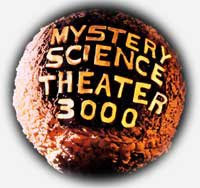 If you are a comedy and a geek (as opposed to just a comedy geek), there is no more satisfying experience than sitting around with a few like-minded friends and watching Mystery Science Theater 3000. The show, which started out on a UHF channel in Minneapolis-St. Paul and went on to air on Comedy Central and the Sci-Fi Channel, was a unique weekly skewering of bad cinema.

For the unfamiliar, the concept was that janitor Joel Robinson was taken from his job at the top-secret Gizmonic Institute and forced to watch an unending series of terrible movies, monitored by evil scientists Dr. Clayton Forrester and Dr. Laurence Erhardt. He coped by building two robots, Tom Servo and Crow, who would help him poke fun at the movie while it was running. Joel was later replaced by temp Mike Nelson. (For any true geek, that summation is horribly insufficient, and I beg your apologies, check the FAQ at Satellite News for more info).

It would make sense that M.I.T., an institution filled with science geeks, would also be filled with MST3K geeks. Tomorrow, some of those fans will host what was originally intended as a retrospective of the show, but has now become a discussion with MST3K creators Joel Hodgson and Trace Beaulieu, sponsored by the Comparative Media Studies Program.

Generoso Fierro, Event Coordinator for the Comparative Media Studios Program, originally contacted representatives from Hodgson and Beaulieu’s new project, Cinematic Titanic, which is coming to the Somerville Theatre February 20 and 21. Fierro just wanted to get work to them about his own show, and wound up getting a lot more. “We just were curious if they wanted to do any promotion, and then all of a sudden they contacted Joel and I got a phone call from Joel,” says Fierro.

That led to Hodgson and Beaulieu’s appearance at the event, which happens tomorrow at M.I.T. Building 26, Room 100 (26-100) at 7PM ($5 donation for cover). That changed the nature, and the name of it. “I think they want to concentrate more on the creation of the world,” says Fierro, “so the name of the event now – it was ‘Talking MST3K,’ but now it’s ‘The Design and Speculative Technology of MST3K.’ So it’s really going to be about the robots, and it’s going to be about Gizmonic Institute, and the structure they built themselves.”

There will be a question and answer period and a signing following the discussion. Fierro, who will moderate with masters student Jason Begy, will certainly have questions – he has fond memories of watching MST3K during its original run (Comedy Central ’89-96, Sci-Fi ’97-’99). “There would be a bunch of us, mostly M.I.T. folk, just crammed into my little apartment on Park Drive,” he says, “and probably with ten people in a room that would fit three. And every Friday night, most of them would end up staying over and watching it the next morning because they’d miss half of it laughing.”

Fierro and company will get together to watch and discuss some of their favorite episodes Sunday, but that won’t be open to the public.

Watch this space for more information on Cinematic Titanic at the Somerville Theatre closer to the show date, February 20 and 21. Tickets go on sale Monday.
Posted by Unknown at 1:21 PM