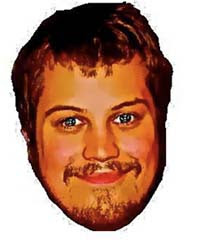 Every month, The Comedy Studio hosts a new "Comic in Residence," a comedian who plays the venue every day for a month. It's a program developed by Studio owner Rick Jenkins to help comedians develop their craft by getting onstage as much as possible.

Starting this month, we'll be interviewing the Studio's Comic in Residence at the beginning of each month, finding out how long they've been doing comedy and what they plan to do at the Studio. This month it's Tim Vargulish, a smart up and coming comic from Rhode Island and a regular on the Boston scene for the past couple of years.

I've consistently played the studio about 1-2 times for the last two years.

I also play at Mottley's and Catch a Rising Star.

I'm not sure if any local comedians have influenced me. When I first started out I was influenced by David Cross and Patton Oswalt. There are tons of amazing local comedians that I look up to, Shane Mauss, Joe Wong, Sean Sullivan, Josh Gondelman, sorry but there's just way too many to name.

Around twelve a month, give or take.

I'm just hoping to have a great experience, performing every night with tons of incredibly funny people and improving my material as much as possible.
Posted by Unknown at 12:56 PM