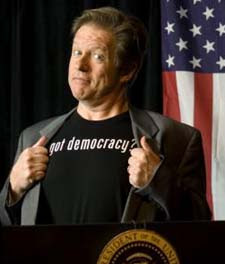 Jimmy Tingle has held a bevy of titles in this town. The Cambridge native was a bartender at the old Ding Ho, where he eventually earned the title of stand-up comedian. He was a street performer who used to play his harmonica out in Harvard Square. He once did the “Andy Rooney spot” on 60 Minutes II. For five years, he was a theater owner and manager, running a space in Davis Square that hosted comedy, music, plays, and sometimes a talk show, which he hosted. You can also add faux presidential candidate, from the title of his last one-man show.

For the past year, Tingle dropped all of his other titles and picked up the title of student, earning his masters in public administration from the Kennedy School in Harvard. Tonight at Bull Run in Shirley, Tingle returns to performing again. He’ll likely be the same Jimmy audiences here have seen over the years, delivering his politically and socially minded material in his distinct, polished cadence and Boston accent. But he’s hoping to approach his comedy a bit differently, in accordance with his new degree.

I spoke with Tingle by phone from his Cambridge home earlier this week.

So what made you decide to go back to school?

How did you settle on Harvard and public administration?

Well that’s where I live, I live in Cambridge. I’ve lived in the shadow of the Kennedy School my whole life. I’ve been studying, I’ve been familiar with the topic over the years. As you know, my act deals with a lot of this stuff all the time and keeping up with what’s going on in the world, and I just said, you know what? This would be a great place to go.

I kept running into people that went there. Friends of mine, colleagues. And I just thought it would be a really good thing to do. Intellectually, career-wise, on a personal level. That’s really what I wanted to do. I wanted to figure out new ways to think about the same subjects. New ways maybe to use my entertainment skills for something beyond entertainment. I had a lot of ideas. Once the theater closed I just wanted to do something different.

How did you mix with the student population there?

Oh, great. You know what? I had a ball. I just love the students. The people are great. They’re just smart. Down to earth. Really very committed to improving society in their various fields. The student population is so diverse. It’s everybody from military, and Navy SEALS and helicopter pilots to Green Beret types, special forces and national security types all the way to people who run non-profits in Afghanistan and Iraq and U.N. workers. You’ve got people from all over the world, you’ve got Israelis and Palestinians mixing for the first time sometimes. It was just beautiful. It was just a fantastic experience.

Was there anything that surprised you about it?

What surprised me the most was how important and how unique and how influential popular culture is in the world of – or can be – in the world of academia. When you step out of what you do, you realize the significance of what you do. That’s what my take away was. I said, wow, what I do is really different. Not everybody does this. Not everybody can do it. And it’s really unique and it’s really special. And I can do a lot of good with it.

Did you get recognized in class frequently? Were people surprised to look over and see you sitting next to them?

You know what? I thought I’d be going to like another country. I felt like no one’s going to know me. I get in there, many of the teachers had been to shows. All of the deans had been to the shows. I couldn’t believe it. They all knew me.

So many of these people have been to the shows over the years. Especially the professors and the deans and people like that had come to the shows. I was really surprised. Not so much the students, although some students had, the Americans had. So that was really surprising to me. Because I really wasn’t going there as a comedian, nor did I want to. I was never “on” during class. I was never trying to be funny. I was just there to listen and to learn and literally to try to get through the material, just like any other college course.

How long were you there?

So what now that you have this? What’s the next step?

I don’t know, Nick. I’m really going to focus on these performances. I’m going to focus on using comedy, hopefully, for more than just entertainment value. I’m not sure how, but that’s kind of what I’m working on now.

Is there anything immediate that you can think of that your studying will change about your performance?

I think it’s opened me up to a better discipline of reading, writing. It’s broadened my perspective on how the world works. It broadens your perspective of how the country works, how the world works. Just the diversity of opinions and the diversity of mindsets. You get exposed to people from other countries who are there at the Kennedy School trying to improve water purification in Africa or bring electricity to parts of Asia, to reduce poverty in Latin America. And the challenges that they face are huge. We have our own challenges, but they’re not those types of challenges.

You have people who are there from Israel and Palestine. Their challenges are literally life and death, and their politics matter and change of policies matter to people in profound ways. The same with the African countries. It puts America and the world into perspective in a very real way that you don’t get from just newspapers. Although, just being familiar with all these different scenarios over the years by reading newspapers and paying attention to the news, then you start to put human faces on these situations. And that’s something you don’t get from newspapers – the human connection.

Is it going to be an adjustment going back to performing after having spent the last year mostly on studying and schoolwork?

I just want to be exposed to more ideas. The biggest thing’s going to be how to maintain this intellectual stimulation and not just retreat back into the old patterns. I just need new challenged. Really, I went to school for a new challenge. I just had been performing for more than thirty years, I had run the theater, I had done national television, and I just said, I think I can do more. I think I can learn more. That’s really why I went back to school.

One of the challenges I think would be incorporating that intellectual vigor into something that can still appeal to a broad audience. I’d assume you don’t want to go up and cite case studies and things.

Yes I do, Nick. I want to cite some case studies. [Pause] No. I’m kidding. But you know what I do. It’s fascinating to me how well-received what I do is at Harvard. That was really surprising to me. In a good way. They really enjoyed my sense of humor when I did perform. I just did a couple of things. Or even the commencement speech, for example. It was just really well received. It’s unique. And it put what I do in perspective with the rest of society, and literally, the world.

What you do can reach people more immediately than what someone who’s studying in the same program as you are might.

Absolutely. I mean, the commencement address that I did at Harvard, they’d never seen anything like that.

Being more of a blue collar guy, was there a culture shock at Harvard?

Not for me, Nick. I was myself. And I think there was a great appreciation for people for who they are. I mean, a blue collar guy in America is the top one-tenth of one percent in the history of the world in terms of living standards. So you’re there with people from Rwanda who were there during the massacres. You’re there with people from the Congo who are fighting diseases that we eradicated a hundred years ago. So it’s not like you’re disadvantaged at all if you’re an American. In my opinion.

You’re dealing with people who grew up in South Africa where it was against the law to go to school if they were black, or in Latin America where there were the wars from the 70s and the 80s and the 90s, and people from Mexico who are politically connected who are literally under death threats from drug dealers. So to put the human face on all these different trends and all these different issues was just a very eye-opening experience.

I would think all of this would fuel speculation that you might try for a political campaign that’s a bit more serious than your last run for president.

If I were to run, it would be more serious than my last one. [laughs]

That’s kind of a cagey answer.

Okay, maybe I should be more direct. Are you considering actually running for an office?

I’m not. I’m not. But when I went there, you can’t go there without that being one consideration. You know, after doing comedy for almost thirty years, I start to think, is this what I want to do for the rest of my life. And I think the Kennedy School, going there and being exposed to hardcore policy, hardcore political people, hardcore policy wonks, that’s what they do. Many of the people in there will be future senators, congressmen, mayors, presidents of countries.

President Calderon of Mexico came to do our class day speech. He was a Kennedy School student. We was a graduate of the Kennedy School. Bill O’Reilly on Fox News is a graduate of the Kennedy School. The head of the United Nations now, the secretary general of the United Nations is a Kennedy School graduate. That’s what they do. So you can’t be there without considering a career in politics. I didn’t go there because I said, I want to switch careers and go into politics. That’s something I might want to go into someday. I don’t know. I still don’t know. But I’m not getting signatures right now for a public office.

What about the question, is this what I want to do for the rest of my life? Did it confirm for you that you want to keep doing comedy?