The BC Q&A: Christopher Titus 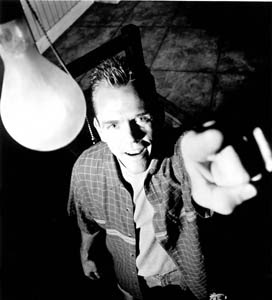 The first time I saw Christopher Titus perform, I was cover comedy for The Buffalo News, and he was performing at the Funny Bone near SUNY Buffalo, my alma mater. He put on a dark show with long moments where the audience didn’t know how to react, like relating how he broke his mother’s suicide to his father over the phone.

That show would become his one-man show, Norman Rockwell Is Bleeding, which would then become his Fox sitcom, Titus. What I didn’t know was that I had caught Titus at a turning point, where he decided what he wanted to do with his comedy after more than a decade in the clubs.

Titus comes to the Comedy Connection Wilbur Theatre with a full plate. He’s working on a new sitcom for Fox, an update of Titus based on his last Comedy Central special, Love Is Evol. He’s also trying to turn his rejected Comedy Central pilot, Special Unit, into a movie. And he’s got a new live show, Neverlution,, which he’s workshopping for the Just For Laughs Festival in Montreal next month.

I spoke with him by phone.

I always expect to hear that you’ve been kidnapped or your wife has shot at you when we speak.

That’s the next special.

Are you at a happy point in your life? I know that in Love Is Evol, you talked about actually being happy.

Yeah, I am, actually. The new one is called Neverlution, The new one is about how we’ve lost our country, how we just gave it away and how we’re raising a whole generation of kids who aren’t going to take it back for us. I’m getting that ready for the Montreal Comedy Festival, which is… I’ve got to have it perfect and ready by July 12.

So one-man shows are still something you’re interested in doing even with everything else you’ve got going on?

It’s such a misnomer, though. People always tell me, Titus, you do such a one-man show style, but I always kind of look at it as, I just do comedy for an hour and fifteen minutes with a them. I saw Lily Tomlin years ago do Signs of Intelligent Life and it was thematic and it was really funny.

The guy I’m working with now, he got Eddie Izzard going at Westbeth Entertainment. He kind of picked me up. He said, “You really do that show in a club?” And I’m like, “Yeah, that’s how I make sure it’s funny.” In a theater, people are willing to let it be quiet and not funny for a while. But if I work in a club where it has to be funny every eighteen seconds, then I get to the theater and I take those moments, and it’s hilariously funny, it just makes it that much better.

Oh, god, when I was really angry.

I remember you were asking the club owner, who was also a comic, for advice on putting that in club setting.

Yeah, Paul. I think his name was Paul. That was one of the first early weeks of me really just going with my new style. I remember that. I found out if you’re just really funny… I think it would be hard to take from a theater to a club, to work on a theater piece that had a lot of good moments in it but not a lot of funny in it, and then try to take that to a comedy club, you’d be dead.

You’d wind up doing highlights, and it would…

It would kill it. I agree.

Wow. You know me all the way back to Buffalo. Wow.

You were in LA then, right, and touring with that in clubs?

Yeah, but if I remember correctly with Buffalo, I had been doing comedy for twelve years, and I got to this really weird place where I really hated my act because I hadn’t found anything, and when I went to Buffalo, I just changed my act. I just started doing edgier, I started performing angrily, and performing like who I really am inside, I guess, and really kind of pushing it. It was working, so I pushed it so far that at one point, I started to walk people out of the room, and then I pulled it back to where it felt comfortable, and that’s where I am now.

So that period was a turning point for you, you’d say?

I had gotten kind of a backward impression of that, where you had been doing that kind of show with those moments where you were digging yourself a hole, especially talking about your mother’s suicide, and trying to reel them back in after that, and you were trying to make it work more in a club.

This was before I got the show, right?

We talked afterwards and you were working on something.

The show you did there was almost exactly Norman Rockwell is Bleeding, I think.

Most of the shows of yours I’ve seen have been intensely personal, and if this is a broader political show, how does it relate back to you?

It’s weird. If you saw The End of the World, it was very topical, and about [raising my kids after 9/11]. This one is about the social structure that we’ve actually currently built in our society right now. I was trying to figure out what this show is about.

It’s not about the politics, it’s about us. I have a whole bit about, it’s not illegal immigration’s fault, it’s our fault for going to Home Depot and picking up six of those guys to build an unpermitted bathroom in a house we can’t afford. That’s the problem. And it’s all about personal responsibility and taking the country back. Dealing with congress and the senate the way they need to be dealt with. I have some weird ideas in this show.

Will we be seeing that show at the Wilbur?

Yeah. I’ve gotta get it right, so I’m really working on it.
Posted by Unknown at 6:32 PM

Email ThisBlogThis!Share to TwitterShare to FacebookShare to Pinterest
Labels: christopher titus, Comedy Connection Wilbur Theatre, Comedy Shows, Interviews, The BC Q and A