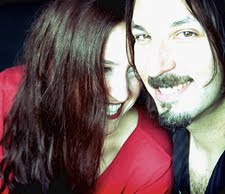 I like to cover music on occasion in this space, so it’s a happy accident when there’s some crossover between non-comical music, like that played by Kira Small and her husband, bassist Bryan Beller. The pair are playing a gig tonight in Braintree at Emerald Hall.

Fans of Dethklok, the band from the animated heavy metal show Metalocalypse on Adult Swim, know Beller as the bass player charged with holding down William Murderface’s low end on tour. And the big Boston connection here is Berklee – it’s where Beller was educated and met Kira.

It’s also where Metalocalypse creator Brendon Small studied before he found a new direction at The Comedy Studio, although Beller and Small would meet elsewhere.

Beller has gone from playing metal in larger venues to somewhat smaller venues playing as a duo with Kira. I caught up with him by e-mail to talk a bit about Dethklok and his current tour.

How long have you and Kira played together?

We actually first met at Berklee College Of Music in 1990, and we played together there briefly - she sang in my Senior Recital, and I played bass on her senior demo tape project (with Abe Laboriel Jr. on drums, if you can believe that!). But we didn't start playing together as a duo until April of 2009, so really our duo thing is just a little over a year old.

Is it much of an adjustment, personally and musically?

Not really! I've been performing with Mike Keneally in the duo format for over ten years, so it was just a matter of fitting that bass+rhythm role into Kira's original material. And since it's soul/R&B, it's actually much easier, and lots of fun. You know, I haven't always just played metal and wacky stuff. I played old R&B stuff in cover bands like everybody else. I just haven't had much of a chance to do that stuff, and it's great to be able to just sit back and groove and let Kira carry the show.

Do you plan to record together?

We've talked about it. No official plans yet, but I think at some point if we keep doing this, it's just going to make sense to do something like that.

How is it to play coffeehouses and house concerts after playing metal in theaters and clubs?

It's really great, actually. It's all about balance. You go on the road in the bus on the Big Metal Tour and it's great because everything's taken care of for you and the situation's pretty cushy, but after a couple of months it starts to get all weird and slightly dehumanizing.

I actually start to crave the more DIY, drive-yourself-in-a-minivan vibe after a certain point. Plus you get to make much more intimate connections with fans and friends on a smaller scale tour. But a few months of that - which is hard on you physically - makes me miss the bus all over again. Ideally I'd get to go back and forth forever.

How did you and Brendon meet?

Keneally introduced us. They met on MySpace, if you can believe that.
Keneally was a fan of Brendon's old show Home Movies, and Brendon had been following Keneally and me for a long time - he'd actually seen us play in Boston with Dweezil Zappa back in 1994 at The Paradise! - so somehow they stumbled into each other online and were already fans of each other's work.

Then Brendon came to a duo show Keneally and I were doing back in 2006, and I met him there. He was telling us how he had just sold this new show about a death metal cartoon band to Cartoon Network, and it sounded really funny to me in theory. Next thing I knew there were billboards all over the Sunset Strip, the show's a hit, the record's a hit, and now he needs a touring band. So, of course, he gets Keneally and me, the most metal guys in the world, to round out the live band.

Are you recording with Dethklok now, as well?

Brendon pretty much does all of the recording himself except for the drums, because he's got Gene Hoglan for that. So no, I'm not recording with them now, but I did track bass on one tune from The Dethalbum II, The Gears.

Brendon's moving pretty fast, dealing with TV show deadlines and all that, so most of the time it's just easier to do it all himself at lightning speed.

Were people disappointed to come to the shows and find you weren't William Murderface?

I sure hope not, because I'm not supposed to be him. I'm just supposed to make him sound good. Those who follow the show know that's a pretty tall order in the first place.

Really, in the end of the day, at the live shows, we're just the pit band for Dethklok. We're there to make them sound good. I hope they're happy with us.

Are you a fan of comedy and stand-up? Did you go to comedy shows when you were studying here?

Yes, I'm a fan of comedy, but really only a casual fan. Never been to a live stand-up show in my life. I certainly wouldn't call myself an aficionado or anything like that. That said, I'm a big Craig Ferguson fan. Is that just hopelessly mainstream? Oh well. I can say that, after getting to know Brendon, I have a much better appreciation for the amount of testicular fortitude it takes to stand in front of a crowd of people and tell jokes.

What are you up to once you are finished touring with Kira?

Some remote recording projects. I've been having a lot of fun doing bass tracks for folks from around the world writing interesting stuff and wanting my musical voice on it, which is nice.

I have some instructional clinics here and there - one's even at the Armed Forces School Of Music in Norfolk, VA (you're talking to an honest-to-goodness U.S. Dept. Of Defense Contractor, I'll have you know). I'm still doing some writing for Bass Player Magazine, where I'm a Contributing Editor.

Then it's right back out with Kira for two more touring runs, one in the upper midwest and one down south in the Carolinas. Then this fall I'm headed out to the west coast for some stuff with Keneally and my own band. Every month is different, and I really don't know what's coming until about 6 weeks in advance. It's pretty damned invigorating.
Posted by Unknown at 10:26 AM