The BC Q&A: Wendy Liebman 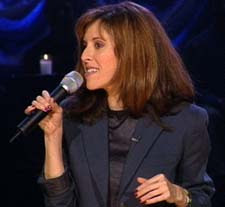 Wendy Liebman can tell you the exact day she started her comedy career in Boston. A Long Island native, Liebman came to Boston to go to Wellesley College as a psychology major. She wound up getting hooked on comedy, joining a scene that included comedians like Anthony Clark, Dot Dwyer, and Brian Kiley, looking up to veterans like Don Gavin and Jonathan Katz.

Liebman credits Boston with showing her who she is as a comedian. “I think I would be a different kind of comedian if I started in New York,” she says. “The audience teaches you, and their sensibility is what I heard. And I think it made me a better comedian. I think I would be more sarcastic if I had learned from New York, and less just amused. So I’m grateful to Boston.”

Thursday evening, she’ll play a benefit at the Regent Theatre in Arlington. This is the third year she has organized the show for Community Works, an umbrella organization supporting social justice causes run by Fran Froehlich and Kip Tiernan, veteran activists Liebman met while working at Radcliffe. It’s a rare chance to see Liebman, who used to do an annual Valentine’s Day show at the Comedy Connection’s old Faneuil Hall location. I spoke with her by phone from her home in Los Angeles.

It seems these days you only get back into town when you’re doing benefits. Are you looking for other places to play here?

I actually did a fantastic gig at the Boston Convention Center for the Yankee Dental Convention, and there were like, I want to say, two thousand dentists there. At our show, but something like thirty thousand dentists from New England. And I’m like, I hope no one has an emergency, a dental emergency tonight.

It’s hard to conceive of that many dentists existing all at once, much less in the same place.

I know, and if only they would have put laughing gas into the showroom, that would have been phenomenal. But anyway, I did get to work there, it was at the Boston Convention Center, which wasn’t there when I lived there.

How much has changed here since the last time you got to explore and walk around?

Either, comedy-wise or the city itself.

Well, the city itself, the whole Big Dig thing was not completed when I left Boston, and now it is. Isn’t it?

Well, that will go on, right?

Yeah. There’s pretty much ongoing work and construction here if you’re in that trade.

It’s like my act, it’s a work in progress. Comedy-wise, what I wish had been there when I was there the Comedy Studio in Harvard Square, which just sounds like such a phenomenal place for people to work on their act. I guess when I was there, there was not that room to do it.

What was the year you started here?

I started in 1984, October twenty-fifth, to be exact. Yeah. So a long time. More than half my life ago.

Do you keep in touch with any comics from Boston? Are you close to anybody here?

I just did a show in LA at something called The Fake Gallery. Not sure if you’re familiar with it, but Paul Kozlowski, who was originally in a comedy group with Bob Goldthwait and Tom Kenny, originally from Upstate New York – Paul moved to Boston and started doing stand-up there, and now he’s moved out here. He started something called The Fake Gallery, which is an art gallery, he’s an artist. It’s decorated with all his art and it’s also a comedy room. And I guess it’s close to The Comedy Studio, in that you can just go there and be random. And it was almost all Boston night. It was Brian Kiley, who’s now writing on Conan – he’s a good friend – and Fran Solomita, Ed Driscoll, and myself. So almost all Boston comedy night.

And then every once in a while I’ll run into Tony V, like on the streets of Las Vegas and we’ll catch up on the sidewalk. And I keep in touch with Julie Barr over Facebook.

Are there a lot of comedians you met in Boston you run into in LA?

I started doing open mics with a guy named Mike Martineau, and I see him every other week, I’d say, at either Starbucks or my supermarket. We live that close to each other. And I don’t know if you remember Brian Frazer, he went to Emerson and started doing comedy. He’s written a book called Hyper-chondriac and it’s just phenomenal. Anyway, he and his wife are both writers, comedy writers. I run into them as well. And Brian, Mike Martineau, and myself started doing the open mics together.

Boston has a reputation for brash, no-bullshit comics, but I feel like there are a few more traditions than that, you being in one of them, a sort of quick one-or-two-liner comedy. You have Brian Kiley, Don Gavin – who’s probably the source of a lot of it – and people like Myq Kaplan now, who’s a bit younger.

What got you involved with Community Works?

When I worked at Radcliffe after college, I worked at the Bunting Institute, which is a fellowship program for women, and there were two women there who were community activists, Kip Tiernan and Fran Froehlich. I’m sure you’ve heard of Kip because she started Rosie’s Place. And both of these women are like modern day Mother Theresas. I think they were even once nuns. I would do anything for these women. And when I worked at the Bunting, I started talking about me doing a benefit, and it came to fruition three years ago. So this is the third year.

I do about twenty benefits a year in LA, and I’ll travel every once in a while. But this is my benefit, this is the one I organized. And this is the umbrella organization to many social organizations in the Massachusetts area. It’s a hard time economically for everyone, myself included, and I think the trickle-down effect must be horrendous. I feel like it’s not a huge commitment, it’s twenty-five dollars, and yet it goes so far, I think. I always feel like when I give, I get more back.

There are so many organizations involved with Community Works, I think it’s hard for people to wrap their heads around a benefit for it.

Well, they don’t like to be compared to United Way, but that’s how I explain it to people, because I think people get that. I know Kip and Fran, and just having them at the helm, I just feel safe that all the money that is raised goes to bona fide, above the board, helpful organizations.

Do you think you’d ever revive your Valentine’s Day show here?

I would love to. I just haven’t been invited. I guess since they moved to the Wilbur Theatre, it’s a different configuration. I would probably have to bring in a co-headliner because it’s such a big venue.

Anything else you’re up to?

Well, I’m turning 50 in February, and my plan is, although I’d better get started, my plan is to have a party but also record a DVD that night, to perform for my friends, and record a DVD. Because I don’t have a DVD. Even at my worst shows, or what I consider my worst shows, people want to buy something. So that’s my plan.
Posted by Unknown at 8:19 PM