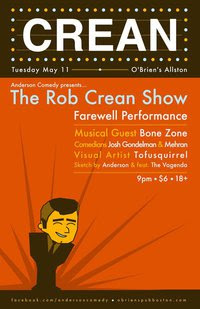 There are few option for comedy on Tuesday nights in Boston, so it is with sadness that tonight we say goodbye to The Rob Crean Show tonight at O’Brien’s in Allston. Rob Crean and his Anderson Comedy cohorts started the talk/variety show in in March of 2008 (first guests, Crean notes, were Myq Kaplan, who just celebrated the release of his Vegan Mind Meld CD and his Comedy Central special at The Comedy Studio, and Comedy Studio regular Renata Tutko). Crean would do an opening monologue and welcome comedians, musicians, and other guest.

Crean reports the main reason the show is ending is that his producer, Lucas Lewis, is moving to Connecticut (to see Crean and Lewis talking about the show, take a look at this post from January of 2009). Tonight’s show will welcome back guests and regulars from the past two years, including Katie McCarthy, Kate Robinson, and Gretchen Gavett (doing their “Vagenda” segment), Matt Wilding doing his news segment “Wilding Wilding World,” Mehran, Josh Gondelman, and musical guest Bone Zone. Recent show regulars, Lucas Lewis, Adam Haut, Brendan Thomas Crowley, and Ryan Douglass.

Crean’s other regular show, The Gas, at Great Scott, will continue every Friday. Here are a few parting shots about the Rob Crean Show from Crean himself.

Will any elements of it get ported over to the Friday night slot at Great Scott?

Yes. We're trying to do more of the "segment" style sketches we did at Great Scott at "The Gas." We may even try to do a tighter version of the show at The Gas. It'd be a lot different, we wouldn't really be able to have a band, but we might get acoustic acts instead. We'll see.

Do you feel like you've accomplished what you wanted to do with the show?

Depends on the month really. Some shows go so well, and you leave the venue thinking, "that's exactly what I was trying to do," other shows have three people show up, after you've spent all month putting together brand new material that you're going to do once. That doesn't feel great.

Do you see more shows with a sense of community in the Boston comedy scene these days?

Good question. When I first started doing comedy, I felt like it was really hard to connect with people, and now I don't, but that's probably just because I've been around for a while now. I wonder if people who are new find the scene more welcoming now that I did. There were a few people who were really welcoming when I started though, namely Renata Tutko and Shane Webb.
Posted by Unknown at 4:32 PM