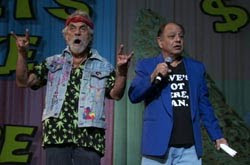 Cheech and Chong were gone from the comedy landscape for 25 years. Fans had to go to the old albums and movies to see their favorite high-minded heroes. Now, you can see the pair on tour and on their new DVD, Hey Watch This, which chornicles their Light Up America reunion tour, which began in 2008 and is still going strong.

Now it's called the Get It Legal tour, which Cheech and Chong will bring to the Comedy Connection Wilbur Theatre on July 8-9 (they'll also be at the Cape Cod Melody Tent on July 11, tickets go on sale for that tomorrow). The DVD was released on 4/20, and just to keep the theme going, the Connection will start selling tickets this afternoon at, yes, 4:20PM. You can get tickets here at that time.

On the last tour, Cheech and Chong concentrated on a kind of greatest hits package, doing scenes from the movies and albums, with Chong doign stand-up in between. Now that they've been together for more than a year, it will be interesting to see how much new material they might generate, and if they can get away with replacing some of the more classic stuff they've been doing.
Posted by Unknown at 10:20 AM