The BC Q&A: Tess Rafferty, Emerson grad and Soup writer 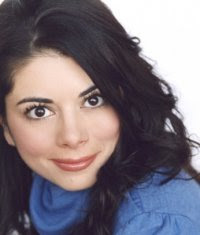 Forty-nine weeks a year for the past six years, Tess Rafferty has been a writer on The Soup, making fun of television for Joel McHale and company. You’ll sometimes see her on camera on the show, or sometimes on the Web as Grace Church FBI/CIA/SAG/AFTRA. But for a while, you haven’t been able to see her much in Boston. Tonight, you’ll get to see the Emerson grad back on her home turf, in Boston where she started comedy.

Rafferty’s first gig was at the Comedy Connection in the mid-nineties, which is where she met Frank Ahearn, whom tonight’s show at Tommy’s Comedy Lounge is benefiting. Ahearn had a massive stroke in December, and while he is recovering, he’s still not one hundred percent. So comedy friends like Rafferty, Gary Gulman, Steve Sweneey, Joe Wong, and others are pitching in to help out.

I spoke with Rafferty by phone from Los Angeles.

Do you get much time to go onstage, considering your day job and other obligations?

Not as much as you would in Boston. I get up a fair amount. I go up a couple of times a month out here still. There’s just not as much stage time out here anyway as there is in Boston. But it all evens out.

Do you consider yourself a writer first and a stand-up second or do they hold equal weight for you?

But there are different muscles you need to flex, doing stand-up, writing, and doing things like Grace Church.

It is different muscles, which is really what makes it fun. It’s fun to get your sea legs and get up and do stand-up again. It’s a completely different set of muscles than when you’re doing something on camera. Because stand-up’s so immediate. The first time you tape something that’s for television, you don’t have a live audience there. Film is even worse because you don’t have anyone there.

If I tape something for The Soup in the studio, there’s usually an audience there who’ll laugh. But if I’m taping something for Grace Church or another short film, there’s nobody there. You’re so used to that immediate response for stand-up, and it’s something that, if you make a joke on the set of a movie and it’s funny, you don’t get anything. It’s a very weird experience, especially for stand-ups. That laugh is what keeps them coming back.

A lot of comedians will say that instant gratification is what makes them prefer stand-up to anything else they do.

It’s the same reason why so many of them did so much coke in the 80s.

There’s that, as well. Is ‘The Soup’ like a giant opium den there, is that how the creative process works.

No. It is really funny because, you would hear the SNL stories and everything about, back in the heyday of comedy writing, there was coke everywhere. I wasn’t there, you just hear all the stories. And everyone on The Soup just really likes good wine. That’s our vice. We’ll pick a place for drinks, and it has to have good wine.

You’d hear stories about that in Boston, too. But you were at Emerson after all that had passed, correct?

I didn’t graduate from Emerson until the early 90s.

What was the scene like then? Were you doing stand-up or just studying it?

I did start doing stand-up there. It was an interesting scene. The boom had sort of passed for all of comedy. Boston has always been such an amazing comedy town, but, you know compared to the way it had been… You had to go out and find different venues. I was around when The Comedy Studio started. That’s kind of like my era. There wasn’t as much work in the clubs. Boston is a great place because they’re very loyal. The people who keep coming back want to see the headliners and the big guys and stuff.

So there’s not a lot of spots for as many new acts as there were. And a lot of the new acts were kind of… it was when alternative comedy was popular. People were trying to do different things, and so it didn’t really lend itself to the regular Friday night line-up at Nick’s, for example. I was doing more coffee shops, and The Comedy Studio. Those kind of venues. The Cantab. Different places where people would put up rooms and try to get people to come out.

It seems like at one point, you had people like Nick Di Paolo and Patrice Oneal at Nick’s, on that side of things, and you had clubs like, for a while, Catch A Rising Star and then The Comedy Studio providing different kinds of comedy, so you had a pretty diverse scene.

For me, I was after Catch, and Patrice and Nick had already moved down to New York. So it was a little bit later than that. But I always compared it to… when I was twenty-one and I was onstage somewhere in Boston – Boston gets so many people out to see comedy – I was onstage at 21 doing jokes about sex, and nobody wants to see me doing that. Because for most of the audience, I’m like their daughter’s friend who’s a bad influence.

I think it’s really hard, the more I do this, I think it’s really hard for a person who’s in college to really break through. And I think it’s amazing when college-age stand-ups do break through. Because the audience isn’t college-age, and I think there’s a disconnect with a lot of America. I mean, out in L.A., all they want to see a lot of times is youth. But I think for the rest of America, and the people going out to clubs and spending money, twenty-one year-old kids don’t have the money for a two-drink minimum and to pay for parking at Faneuil Hall.

That’s the story with sitcoms, too. The ones that are really successful are about the people who are in their 30s and more seasoned like the Roseannes, the Seinfelds, the Tim Allens.

Absolutely. Ray Romano, Ellen, Brett Butler. You don’t know who you are ‘til you’re that age. You don’t have a voice, you don’t have anything to say. Nothing’s happened to you. Well, things have happened to you, but nothing that the rest of the world can relate to. Or the rest of the country. It’s so limited, the things that I thought were funny, or the things that I had to talk about when I was first starting out. They’re no less real to you, but how many people can relate to the fact that your roommate stole your boyfriend or something. Or how many people want to hear it.

What did you study at Emerson?

I was a theatre major with an art history minor. I did some writing, I took some playwriting classes. I had an independent study my senior year in political theater. So I did some writing in that as well. But I wasn’t a writing major.

Did you study comedy there? I know there have been workshops and classes, and improv groups and such.

Yes, absolutely. So he was a huge influence on me when I was at Emerson. So I took a comedy course with him. In a way, I was a late bloomer to comedy. I always really admired stand-ups, but I would be afraid to say I wanted to be a stand-up because I was always afraid that the way I saw the world wasn’t funny. But then I was doing theater at Emerson. And the roles for women in plays are by and large just atrocious. They’re just horrible. And I always say you’re playing someone’s mother, whore, maid, or wife. That’s all there is to do in these plays. And I just got so frustrated that I started writing my own stuff out of frustration.

If you go back far enough into the Greeks you can play all of those at once.

Right. Exactly. And still end up poking your eyes out. So that’s how I got into writing stuff for myself that became stand-up.

I was doing sketch comedy, and the problem with sketch comedy is that you’ve got to organize five or six comics’ egos, and bring props. So that was kind of a nightmare. And I kind of had a thing that I was putting together and the right opportunity came, which was actually at the Comedy Connection. And a local comic at the time, Chris Maguire, who became my boyfriend later on, he said, we’re looking for new acts, do you want to audition? And I had something I could use. And it’s the same story every comic has. The first time, you kill. And then you never get those laughs again. There wouldn’t be a second time if you didn’t do well your first time.

But it was at the Comedy Connection, and Frank was the general manager at the time, and he’s always been such a supportive figure for myself and my life. It’s why I’m coming back Monday to do the show. I think of it as my home club. It’s where I started. Don’t get me wrong, I’ve played a lot of places, and I owe a lot to Rick Jenkins, as well. If Rick has a stroke, I’ll be back on the plane for Rick, as well.

He’ll be glad to hear that.

Go ahead and have the stroke, Tess says she’ll be here. We know you’ve been holding out.

[laughs] Like I said, I still have the tape, and I looked at it again a few years ago. And I was like, god, that was a good set. I haven’t gotten laughs like that since. The Comedy Connection was a really special place for me. Frank and the rest of the staff, they mean a lot to us.

Have you kept in touch since you’ve been in Los Angeles?

We’d spend a couple of nights out there a couple of times a year. So we saw them more socially, not just around the club. I always credit Frank with making me a food snob. I’d never been to Vegas before, and he started taking us to all these great restaurants. They knew a lot about wine. I always say we have Frank to thank for the fact that I’m the pretentious snob that I am.
Posted by Unknown at 4:45 PM