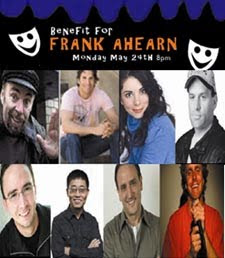 Monday night, Tommy’s Comedy Lounge will host its last gig of the summer, a second benefit for co-owner Frank Ahearn, who had a massive stroke in December. The first event last month was sold out, and featured enough great local comedians in the audience and hanging around outside to put on second simultaneous benefit. Ahearn was also speaking to people through Skype at the show.

I spoke with Tommy’s co-owner John Tobin after the first benefit, before it was announced that Tommy’s was going on a summer hiatus, so Tobin and Ahearn could reassess the club and see how Ahearn is feeling later this fall. I wrote about the club in Friday’s Globe, quoting Tobin that the intention is to reopen the club, and that he would feel it was a failure if it didn’t open up again.

Here’s the video of that interview: