The BC Q&A: Chris Zito is the new "Slash" 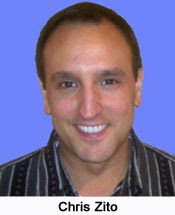 When I spoke with Chris Zito last January, he was ready to quit stand-up comedy and concentrate on his morning drive gig at WODS. He had done a similar dance before, when he was working at 104.5 XLO, and radio came first. Of course, Zito found it impossible to quit altogether, and picked up a gig here and there.

On April 6, Zito Twittered, “I have a job with slashes again. Comedian/Actor/Writer. Need jokes?” WODS was tweaking its format, and Zito was out. Which means Zito will be back onstage again this Friday at Dick’s Beantown Comedy Vault. I caught up with him again by e-mail to see what he has planned.

Since we spoke for the blog about your retirement a couple of years ago, you have done a gig here and there, correct?

Yes, I didn't stay away very long. The format at WODS was new to me and a little more restrictive than what I'd done in the past. The stand up offers so much freedom. I've been having fun on stage.

What keeps you coming back to stand-up?

As I mentioned, it's the freedom. That's always been the thing with stand up. No boss. No meetings. I'm producer, director, writer, and star. Can't point the fingers and can't really complain about anyone else. Besides, I know my way around the schedule C pretty well. I don't mind being self employed. Plus, I have no marketable skills other than cracking wise.

What reason did WODS give you for letting you go from the morning show with Karen Blake?

Just more music intensive. Since they dropped the Oldies moniker they've been focusing on the music. It's really difficult to develop a new music identity and a new morning show at the same time. It's no one's fault. My boss, Jay Beau Jones, and I are friends. Hopefully we'll have a chance to work together again.

Is anyone safe on the radio anymore?

Beats me. Commercial radio is almost unrecognizable to people who go back as far as I do. Let me check my Magic Eight Ball app..."my sources say no."

Do you think you’ll look for more radio work or move back to stand-up full time?

I'm not ruling anything out. I'm not finding a ton of stand up work right now. My prediction is, I'll fill up my calendar for the fall and winter, then get another radio gig in a few months, and have to suffer with being out every night and getting up at 3:30 again! Summers are slow, and most comics book months in advance. I'll catch up. I may go on the road again a little too. Who knows?

Make no mistake though, I love radio. It still seems like magic to me. Hopefully that's where I'll land.

You posted on your Twitter that you have a job with slashes again. Are you doing any writing and acting?

I've reached out to the casting agency's in town and gotten a warm welcome back. As for writing, I've lost my excuse not to write new material for my act. So...a few new jokes. And I'm approached occasionally to write jokes for other people or punch things up. Also, talking to a couple of people about speaking engagements. I don't really even know what that means, but a couple of guys have told me for awhile I'd be good at it. Really? If you say so.