The BC Q&A: Myq Kaplan, CD release party at the Studio Saturday 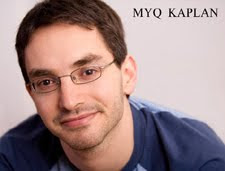 It’s hard to get a straight answer out of Myq Kaplan. The former Boston comic, who moved to New York City in the summer of 2008, is a quick wit. And he jumps to misdirection and word play with a minimum of set-up, and has a knack for structure, which is evident in this e-mail interview.

More people will get to enjoy that wit this week, with the release of Kaplan’s debut national album, Vegan Mind Meld (he self-released his first album, Open Myq Night, recorded at Club Passim). He’ll celebrate the album tomorrow at the Comedy Studio. Also, tonight at 11:30PM, Comedy Central debut’s his half hour Comedy Central Presents special, adding to his Conan O’Brien and Live at Gotham TV credits.

I've heard a lot of the material on Vegan Mind Meld, but there are a lot of new tags for older material. Do you ever consider a joke "done”?

Short answer: Depends.
Medium answer: Not usually. Maybe I used to, but almost never anymore.
Long answer: Most of my jokes are created one step at a time, starting with an initial kernel of an idea, sometimes ending as a one-liner, but more often these days growing larger and larger, as tags and more ideas occur to me on stage or off. So, I might have thought some jokes WERE "done," but in performing them in different situations, sometimes they become UNdone (in the good way, not the falling apart way).
Sometimes, new experiences inform old ideas in a different light, and what was previously one short thought can lead into a longer one, or a story, or a multi-faceted something or other. In fact, I'll probably have an extra-long answer to this question long after it's too late.
(And I might edit out the phrase "multi-faceted something or other."
But feel free to leave this all for now. All part of the process.)

Did you get to preview the Comedy Central special much? Were you able to get everything in as you wanted it to be?

Short answer: Hopefully.
Medium answer: I have not previewed it.
Long answer: I have only seen the clips they put up on the website that everyone can see, and of those, I'm not sure which (if any) of them are actually IN the special or just being used for the web. That said, I was very happy with the taping, so I'll be happy as long as it's not 30 minutes of commercials.

Boston has produced some fine comedians that work in a style similar to yours, in that quick, two or three lines style. Were you influenced by Don Gavin, Wendy Liebman, or any other local comics, stylistically?

Short answer: No.
Medium answer: Maybe.
Long answer: I love Don Gavin and Wendy Liebman, but I didn't know who they were when I started doing comedy. I've only seen Don Gavin live a handful of times, and I've only seen a few TV spots of Wendy's; I really appreciate what they do, and recognize that we have some stylistic things in common, but I believe that I gravitated towards what I do because it's what comes naturally to me. Obviously we are all influenced by everything around us (except for the hermit comedian, but no one knows who that is because I made him or her up...
or did I? If I did, why didn't I settle on one gender?), that can't be helped, but I mostly just aim to be influenced by myself. I enjoy the work of others, both those similar and those dissimilar to me. And thanks.

How was the transition from Boston to New York?

Short answer: Fine.
Medium answer: Difficult at first.
Long answer: Fine and difficult at first. Starting comedy in a new city can often be a challenge, just finding out what places there are to perform, where to see good shows, how to get on shows, who to talk to, getting to know people, becoming a part of the community, etc.
Starting in Boston was great, because it's a decent-sized city with a number of clubs, other venues for standup, and a very welcoming and encouraging and manageably-sized community of working comics of all experience levels. Starting over in New York was more complicated at first, because there are so many clubs (some I haven't even been to yet), so many shows and bookers and venues that come and go, so many communities within the world of New York comedy. I had help a bit, from a few sources: 1) comedians I knew from Boston who were now living in New York and could help direct my efforts a bit, 2) bookers and comedians who were at least somewhat responsive to the fact that I had one TV credit by that point, and 3) not much else. I looked up open mics on the internet, did a lot of trial and error, made a lot of phone calls, hung out at a lot of places, and I'm still in a place where I have to work to get on at some clubs, some shows, which is fine. I like the work. And it's gotten easier, with a few fortunate happenings, a few more credits, a few more comedians and bookers learning who I am (and caring/thinking positively of me). It was definitely a chore at first, getting situated, but I feel very lucky that things went my way relatively quickly.
Extra-long answer: see my autobiography.

What shows do you frequent in New York?

Short answer: None.
Medium answer: Honestly, unlike Boston, where I might perform at the same venue once a week or more, in New York, there are so many shows and places to perform, that I don't necessarily end up any one place "frequently."
Long answer: That said, the club I perform most at is Caroline's.
They've been the most generous with stagetime and support, and I can't be more grateful. Comix is another club that I love, and that I perform at as often as possible. In the non-club scene, UCB's Whiplash show is wonderful, as is Moonwork, and Thursday nights at Kabin, Tell Your Friends at Lolita Bar, Bowery Poetry Club, and many more that I'm probably rude to be forgetting. Sorry!


Anyone on the bill with you Saturday at the Studio you're especially looking forward to seeing?

Short answer: Yes.
Medium answer: Just kidding.
Long answer: I always love performing at the Studio, no matter who is on the show. I believe I know almost everyone on the show and think very fondly of them.

Any other Boston shows coming up soon?

Short answer: Yes.
Medium answer: Is this joke/concept getting old?
Long answer: I believe I will be performing with Greg Fitzsimmons on his annual BU Alumni show at Boston University's graduation weekend on May 14, and I will be opening for Bo Burnham's DVD taping at the House of Blues on May 21. Looking forward to both of those with great anticipation. But not as much as this Saturday at the Studio, maybe.
CD release!
Posted by Unknown at 3:10 AM