The BC Q&A: Erin Judge on The Dress-Up Show's one-year anniversary 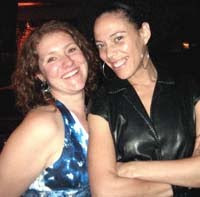 Erin Judge and Bethany Van Delft celebrate their one-year anniversary of The Dress-Up Show tonight at Mottley’s with Ken Reid, Tom Dustin, Mehran, Jenny Z, and Tim McIntire. The concept is that comedians wear their fanciest duds, or, likely in the case of many comics, borrow some fancy dud to wear. The audience is encouraged to do the same, to create Boston’s funniest formal party.

Judge moved to New York City last year, but comes back to the city where she started her comedy career once a month for the show. She’ll also get back to her native Texas to play this summer.

Do you have anything special planned for the one-year anniversary?

As everyone knows, the one-year is the "paper anniversary." Both Bethany and I will incorporate paper into our outfits, plus we'll have special prizes for EVERYONE who comes to see the show. We'll also revisit some of our best moments from dress-up show history, including some of our favorite performer costumes.

How much have the comics indulged in dressing up? Have any been reluctant to dress up?

For me, the comics' reactions have been the absolute best part of doing this show. Everybody seems to enjoy kicking it up a notch. Ken Reid wore a Space Ghost costume the first time he performed; Dan Boulger rented a formal tux with coattails and a top hat. At our very first show, Mehran came in drag. It's been a fantastic time. A couple of comics along the way were reluctant because they thought "dress up" meant "wear a dress," and we had to explain that we just wanted them to wear something different from their usual on-stage attire. The comics who do the show all seem to love it.

How have audiences reacted? Do they generally dress up, too?

I've been impressed! Of course, the audience doesn't have to dress-up, but their outfits can win them prizes. Each week we draw a category for an audience prize -- best shirt, best bag, best shoes, etc. That element of the show really gets the audience involved. And we've had some really snazzy audience ensembles, especially from some of the bachelorette parties that have come our way. Even people who don't come particularly dressed up have a good shot at winning the prize, which is based on audience votes.

Does it affect the comedy at all?

I think it makes the performances particularly memorable! It sometimes takes comics out of their comfort zones, but usually I see them come into a really fun place as a result of the snazzy attire. I love watching the comics at our show. It's always a whole different level of performance.

What made you think of a dress-up show?

Well, I wanted to co-host a show with Bethany Van Delft, because she's fantastic, and we work really well together. A couple of years ago, I went to go see the "Sex and the City" movie, and I was just amazed by how everybody dressed up in their best cocktail outfits to go see that movie. We thought it would be a great idea to create a monthly show where people could wear their dress-up clothes in an informal setting, just like going to the movies.

Plus, Bethany and I both tend to work the "alternative comedy" scene, where comics tend to wear ripped up hoodies and legwarmers on their faces and stuff like that. We wanted to give them an unselfconscious setting where they could dress like the old-time comics always did, in suits and ties and dresses....and costumes too, if they so desire.

Are you looking forward to going home and playing Texas again this summer?

That'll be super fun. I'm psyched to perform in Austin at the LAF Festival, and it'll be very interesting to stay with my mother for several few weeks.

Do you think you'll keep doing the show for another year? How has it been coming up here for the show once a month?

I love doing the Dress-Up Show. We did one in New York, and it went extremely well. We're hoping to do a monthly show in Boston and a monthly show in New York. Bethany and I always bring something new to each show, but mostly the showcase format is what keeps it fresh. I think we can keep it growing and building for quite a while.
Posted by Unknown at 9:08 AM