The BC Q&A: Sam Walters returns to Boston with King Hell at Great Scott 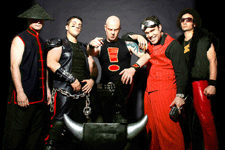 I first met Sam Walters shortly after I moved to Boston and started covering comedy in 1998. He was part of a comedy group that included The Walsh Brothers, Kyria Abrahams, Val Kappa, Ben Joplin, Dan Sulman, and Tim McIntire, a bunch of regulars at The Comedy Studio, trying to do something a little different, and generally succeeding.

Walters was always a musician, as well, and when he moved to New York City several years back, he turned his attention to music. His band, King Hell, is making a rare appearance tonight at Great Scott as part of Rob Potylo’s Quiet Desperation Presents the 32nd Annual WBCN Rock n Roll Rumble, hosted by Niki Luparelli and Shawn Sixx.

I spoke with him by Facebook about the show yesterday.

Do you perform comedy anymore, or are you strictly staying with music now?

I'm not doing stand-up at the moment--my long suffering liver would up and quit if I started attending both comedy AND rock shows--but there's plenty of comedy in King Hell. I've got a two-horned anvil now... Christ, I've become the Carrot Top of metal.

Do you still get out to see comedy?

Not too often, though we played the Jerkus Circus earlier this month in Worcester, which was phenomenal. The hosts, the Steamy Bohemians, were as hilarious and deplorable as I remembered them... which isn't too clearly. Man, stand-up was a boozy time. I remember coming out of the Comedy Studio one night and thinking, "Damn, I'm drunk AGAIN." Thanks Jenkins...

What's the difference in dynamics between fronting a band and doing stand-up?

Stand-up, for me, was an intellectual exercise in crowd seduction; "intellectual", in my case, consisted of high-brow dick jokes (a genius concept). I was trying to solve the riddle of the audience, poking and prodding them 'til something clicked. Fronting a rock band is much more of a one-sided physical display; the audience comes to you. Some comics can bridge that gap though, like Kevin Knox (may he rest in peace, though he's probably not resting, wherever he is). That guy was a rock star. Ask Brian Longwell about his night at the Kowloon with Kevin and these twin sisters who... um, ask Brian. Don't let him leave out the part about the snakes.

For the uninitiated, how would you describe King Hell?

We're like Parliament meets Metallica (though, mercifully, without a band member in diapers). We're a funk-fueled, old-school metal band chock fulla melodic hooks and bawdy humor that, according to a recent review, will make you break out in a maniacal grin and new dance called "the fist pumping booty shake". Call it Berzerk Du Soleil.

Anyone you're looking forward to seeing again in Boston?

Certainly not Tim McIntire. Now that he's vegan, he won't take me fishing. Otherwise, being a metal front man, I'm entitled to say, "I love you all!!!"
Posted by Unknown at 1:25 AM

1. King Hell is an amazing band;

2. The reason I don't take Sam Walters fishing is because he's way too rapey to be on a boat in the woods with.