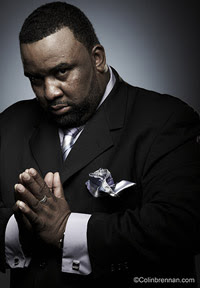 If you want to see Jonathon Gates tonight, you have a couple of choices. You can stay home and watch him on Starz, making his debut on Martin Lawrence Presents 1st Amendment Stand-Up (his episode airs at 11PM). Or you can join Gates, Brooklyn Mike, and some Gate’s favorite comedians at the VFW Post at 10 Highland Avenue in Randolph for a viewing party. Gates has been a staple of this scene for more than a decade bringing his own Black Comedy Explosion to different venues, from the Comedy Connection to its current home at Slade’s. I caught up with him by IM to talk about the show and the BCE.

How did you get the spot on Martin Lawrence’s 1st Amendment Stand-Up?

Well they were having auditions all over the country. The guy who is the host, Doug Williams, told them about me. I hosted the audition in Boston and he got to see me. Only 38 were picked out of 1500.

How did you know Williams? Just from touring clubs and such?

He reached out to me through mutual comics and he came and did my Wednesday night.

What do you think this appearance will do for your career?

Not up to me but whatever GOD has in store I am ready.

How did it feel at the taping? Was it more exciting, or just another gig for you?

Well to be honest I was sitting back watching everyone and going I GOT THIS.
If you go to Starz you can see a piece of my show.

Was it something about the crowd, or did you just feel confident that night?

I know I had a lot to offer to the crowd than I was watching some others do.
The crowd was great.

How did you decide on Brooklyn Mike to play the viewing party?

Well, I am really cool with him and I know the Boston crowd loves him. He is family to me. It was easy.

How did you meet him?

Through another comedian by the name of A.G. White. It’s been over ten years now.

What do you think makes him click with the Boston crowd?

Just like me, he is a people person and he meshes with any crowd.

Do you think any of the Boston comics who auditioned have a shot to make it on the show eventually?

Any of them in particular stand out to you?

Steve Donavon. A white guy doing his shtick to a majority black crowd and he was so cool and collected and was killing them.

How did you hook up with Slade's as the home of the BCE?

After the Comedy Connection , I was doing it once a month at the Russell Auditorium, I just knew Boston need a spot for people of color on a regular basis. I started doing comedy at Estelles from Slades was there almost a year. When they closed the guy who owned the Mirage (Estelles) own Slades, Frank Williams, and he offer me a spot to bring it to Slades on a regular basis. It is a great spot – food, people and great laughter.

Do you feel like the show gives comics, especially black comics, opportunities they might not get elsewhere, or do you feel the scene is fairly open?

Hell in this city and most major cities if I didn’t have this spot a lot of black or Hispanic comics would never be set be seen.

Are you going to be performing at the viewing party, as well?

I don’t think so. I think I will relax and take it all in.

Will Brooklyn Mike do time?

Yes and probably some of the local acts like Big Moe, Just Al, Christine Hurley and Lady Vain and hopefully we get blessed by Chris Tab and Corey Manning.

Was Martin Lawrence an influence on you at all?

I have to give credit where it is due. He and a lot others have opened up doors for black comedians trying to make it. What he has done for comedy is a great thing
comedy
Posted by Unknown at 5:03 PM

I wanted to let you know that my new animated short film, FRUGAL FAMILY CHRISTMAS, is online and in competition at the Fox / Aniboom site.