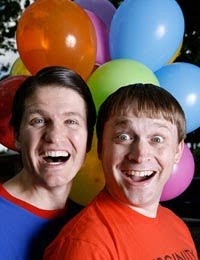 According to the bio on the back of their new book, What Would God’s Pottery Do? The Ultimate Guide To Surviving Your Teens and/or Being Successful, God’s Pottery is Gideon Lamb and Jeremiah Smallchild, international television stars touring the United States. Last Comic Standing brought the Christian musical duo national attention last summer, but before that, they played Great Scott in 2006 when the Allston venue tried to form a partnership with the Upright Citizens Brigade to bring regulars from their New York stage to Boston.

Tonight, God’s Pottery is back at Great Scott, this time as part of Anderson Comedy’s regular Friday night show, The Gas. I caught up with the duo, who are played by Wilson Hall and Krister Johnson, by e-mail this week and tried to get them to break character (I know that Johnson, who plays Gideon, is originally from Newton, and asked about it, but other than a Joey McIntyre reference, they didn’t take the bait).

This is the interview, with a couple of clips from GP’s new prank web series, Christ’d, which is featured on FunnyOrDie.com. In the first episode, they get Mike Birbiglia.

How did you guys meet?

Jeremiah: Well, we first met as kids in our small town in the Midwest. I was riding my bike past the Great Pines Lumber Museum when I saw a boy lying prostrate outside the gift shop. It was Gideon, and he had eaten too much Captain Humely’s Lumber Fudge with Sawmill Sludge (fudge logs with caramel) and a whole jar of Mighty River Log Jam strawberry jam straight from the jar, no bread! I saw that this boy needed a friend to guide him through the misery caused by his overindulgence. he friend I had in mind was Jesus. A couple days later, things really clicked for Gideon and he began to see the importance of Jesus when he fell on his head after attempting to fly off his roof like Superman. He called me, and we became fast friends.

Gideon: So I made two friends that day!!!

Do your siblings come to your shows?

Gideon: Not as often as we’d like. My younger sister, Princess, has come to some shows. (Her real name is Vicki, but everyone calls her Princess because when we were kids she was really into princesses—and still is!)

Jeremiah: I keep trying to get my brother, Brent, to come on out whenever we play the Quad Cities, but he’s always tied up with his responsibilities with the Jaycees. It’s weird though, he always has time to go to the gun range, and he’s invited us every time, but we don’t like guns.

Gideon: “Hugs not guns,” as the saying goes.

What led you to perform in comedy clubs? Aren't they mostly dens of sin and unhappiness?

Gideon: We have to go wherever we’re needed! Jesus didn’t say “Oh, I’ll just let the lepers figure out how to heal themselves while I hang out at the arcade and blow my allowance on video games.” No, he went out to where the problem was—just like we do—and did his part to make a change. Of course, what Jesus did is much more important than what we do…

Jeremiah: …Yeah, but we’re getting there. You know, something we’ve learned is that addressing all the issues out there is a lot like driving in the snow: you have to steer into the problem.

How did Last Comic Standing help you spread your message?

Gideon: Yeah, you have to realize that by being on national TV—and we’re talking about NBC here—we were seen by literally hundreds of viewers, and just the exposure alone helped us spread our message.

Jeremiah: And then add to that the fact that most people are sitting around thinking “I wish someone would tell me more about Jesus and the Bible, and I wish someone would tell me more about what I’m doing wrong and ways I can change that, especially in the middle of a prime time comedy TV show that is otherwise pointlessly secular.” It’s the same reason that religious politicians keep getting elected—people love to have someone making decisions for them based on the Bible.


In your new book, you sometimes mention rock bands like the Rolling Stones, and you sometimes play songs that could be construed as rock songs. Have you read The Devil's Disciples by Jeff Godwin or Why Knock Rock? by Dan and Steve Peters? Are you concerned you might be leading impressionable kids astray?

Jeremiah: Hey, listen, we like to rock out every now and then…

Gideon: Sure, we listen to a little Ronnie Milsap, or maybe some Christopher Cross…

Jeremiah: Yeah, we’re not against “hard rock,” it’s just that some of the harder stuff—The Spin Doctors, REM—should be avoided for various reasons. We address this in our book.

Gideon: Look at Fergie, talk about a dangerous character: she was once a nice girl on Kids, Incorporated, and then she grew up and now sings hip-hop, and recently urinated herself on stage. You have to be careful whom you listen to!

Jeremiah: We haven’t read either of those books you mentioned, I’m sure they’re terrible.

What can you tell me about Newton, Ma?

Jeremiah: Newton is famous for two things: fig-based cookies and Matt LeBlanc (Joey from “Friends”)! That’s all we know about Newton.

Gideon: We had a friend from Newton named “Krister” (at least that’s what he claimed his name was), but we had to sever our relationship with him after Krister boasted about spiking his Pepsi with lemon extract at his High School dance to get high and/or drunk. We have no time in our lives for drug addicts, let alone boastful ones. And ESPECIALLY ones who misuse baking products.

Why write a self-help book? Was the Bible not enough?

Jeremiah: We feel that reading is the language of learning, and learning is the gateway to knowledge. All the famous teachers have written books, including Bill O’Reilly, whose book “The O’Reilly Factor for Kids” really inspired us to write our own book for kids.

Gideon: And one thing that’s cool about a book compared to writing songs is that a book doesn’t have to rhyme! We actually started writing the book trying to make everything rhyme, but we gave up pretty quickly.

Jeremiah: Notice how all Dr. Seuss books are very short.

Gideon: As for the Bible not being enough, well, the Bible is like the best piece of food on your plate—like a hot dog—but it’s still helpful to have some other food, like potato salad or a pool of ketchup to eat along with the hot dog.

Jeremiah: And that’s where we come in.

Gideon: Think of us as a pool of ketchup.

Jeremiah: I wasn’t jealous of the shirt itself, I just didn’t like that everyone thought of Gideon when they thought of virginity, and not of me! I’m just as big a fan of virginity, if not bigger!

Gideon: Yeah, but I have it on my shirt, so…

Jeremiah: See? That’s why I was frustrated. But I’ve found a way to work through my frustration, and that’s just that I vow to be a virgin longer than Gideon.

Gideon: Ok, well, you better be prepared to wait a long time then.

Jeremiah: Oh, I am. And you see that? That’s an example of a good contest, a good game that the Youth can play, instead of “Who can get pregnant the fastest?” or “Whose shirt is the most see-through?”

What other projects can people look for from God's Pottery?

Gideon: We’ve got a brand new web series called “Christ’d!” where we prank our comedian friends with goodwill and concern.

Jeremiah: It’s like the show Punk’d, but the pranks are good-natured.

Jeremiah: Plus we’re on the road these days performing all around the US, and when people come to see us, they’ll hear songs they’ve never heard before, including on TV and the Internet!

God's Pottery is coming live to Chicago's Lakeshore Theater. Performing this Thursday, November 19th, at 8:00pm. Check out www.lakeshoretheater.com for all the info you need!