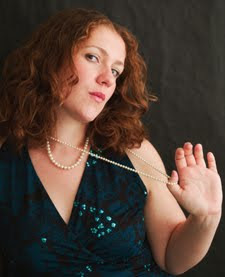 This is an important week for Erin Judge. Not only is she showing of The Dress Up Show tonight with Bethany Van Delft as part of the Boston Comedy Festival, she’ll headline her own send off show Sunday as she leaves for New York City. Judge has been a fixture on the scene since her first open mic at the All-Asia Café in 2002, hosting Sundays at The Comedy Studio, and putting on her two-person show, The Meaning of Wife, with Ailin Conant, and working her way up to an appearance on Comedy Central’s Live at Gotham.

Fear not, though, Boston, you will still get to see her once a month at Mottley’s hosting The Dress Up Show with Bethany Van Delft. I caught up with her by phone on August 21, the day The Meaning of Wife opened at the New York International Fringe Festival.

Are you all ready to move to New York?

I live in New York. That’s where I am right now. I’m here, and I’m excited.

What made you move now?

I’d say what made me move now is just a feeling of… feeling ready to go into the clubs in New York City and perform stand-up at the level I think is necessary when you get started in New York to make a good impression. And I’m also interested in doing casting and writing for television and exploring the possibilities of those sorts of things, which are less available to me in Boston.

Did you get a sense of that world performing in Boston?

There’s great casting agencies in Boston and there’s lots of people who work at all kinds of levels of the industry there, but I think it’s more like, for me, having the interest in television and the other aspects of the entertainment industry that deal with comedy, from TV writing to screen writing to filmmaking, television, most of that happens in New York and L.A., so I really want to be at one of those places at this point in my career.

Do you have any leads and things like that or are you going out there and starting fresh?

I have some good friends who work either in television or do lots of movies and television commercials who have given me lots of leads, but right now I’m flying solo a little bit.

"Dumb and Crazy" from Live at Gotham:

Is it hard to pick up and move everything? I know you had a day job.

I’ve been doing comedy full time for about a year. I left my day job in July of last year. And I’ve been working as a comedian ever since. So that made it easier. It wasn’t like I was trying to finish off a job. But it’s very difficult to pick up and move, especially when I have such great relationships with the comedy community in Boston. Especially with people like Rick Jenkins [owner of The Comedy Studio] and a lot of the other comedians in town. I’m going to miss them all horribly. But I’m excited to close to Boston. I’m glad I’m that not in L.A. I’m glad that I’m about to be in New York and come up to Boston frequently. And I’m very excited that right around now is when the Boston Comedy Festival is happening because I feel it will be a nice way to kind of say goodbye to the Boston comedy world.

Is the September 2 Dress Up Show your send-off show?

Bethany and I will continue to do the Dress Up Show once a month at Mottley’s. I’m going to come up for that, which is great. The real send off show is going to be at the Comedy Studio on September 6. It’s not part of the Festival, but I’m going to be headlining, doing twenty minutes, which is nice because Rick doesn’t always let people do that. But it’ll be fun, and Bethany is hosting that night at the Studio. Since she and I have worked together for such a long time it’s really great that she’s going to be a part of that show.


As far as the Dress Up Show and the Festival, are you going to be doing anything differently because it’s part of the Festival?

Well, we have a really fantastic line-up of people, national comedians as well as local comedians, which is really exciting. But in terms of the show, we really just want to showcase the format of the Dress Up Show as it is for the people who are coming to the Festival. So it’s just going to be me and Bethany dressed up telling stories and hosting a really fun night of comedy where everybody’s dressed up.

How did the show come to be part of the Festival?

I think Jim McCue and Helen McCue of the Festival have a good relationship with Mottley’s. And last year, the club, Mottley’s, opened in conjunction with the Festival. That’s how they made their opening, with Shane Mauss headlining, as part of the Boston Comedy Festival. So I think the club, Mottley’s, with whom we have a great relationship, Bethany and I do, they continue to have a great relationship with the Festival. So it’s great because it’s additional publicity and it’s national acts who are going to be coming into our monthly show, and we’re very excited to have that.

Are you also in the contest this year? [Editor’s note: Erin moved on from her round Monday and will be in the semi-finals]

I am in the contest. My prelim is 9PM Monday on August 31.

Is that something you look forward to, or is that sort of perfunctory?

Well, I’ve done the contest twice before. I didn’t do it last year. But I really love being part of showcase shows and I love the challenge of the five minute set. And it’s a great line-up on the contest. At least the part that I’m on. I like that part of it. As far as being judged and being competitive with other comedians, I try not to focus on that element of it.

What are your plans for The Meaning of Wife?

Well, we open at 4:45 today in New York City. [Laughs] We open at the New York International Fringe Festival today. And we’re performing this weekend and next weekend. So as soon as I get done with The Meaning of Wife on the 29th, I get to come to Boston and do the Boston Comedy Festival.

Are there any plans past that?

Not right now. At the [New York] Festival, we’re going to gage interest in the show. We have a lot of people from the industry coming out to see us. We’re hoping that someone who has the resources to work on booking us around or touring us or even putting up a run in New York will be interested in producing the show. We’ll see.

How much does having the Comedy Central credit help? Do people recognize that?

I think so. I think that people in the theater world are primarily the ones interested in this Festival. But they’re always looking for talents they haven’t seen yet. And a lot of the people who we know who are coming from the entertainment industry are casting people from film and television, as well. So that’s an exciting element of it.

"Maid of Honor" from Live at Gotham:


What local comedians influenced you?

Definitely the Walsh Brothers and Kelly MacFarland. And I of course love guys like D.J. Hazard and Tony V. When I think back to the performers that I would work with when I first started performing at the Comedy Studio, people like Tony Moschetto and Bethany Van Delft were extremely awesome to work with from the very beginning. And my other peers like Myq Kaplan.

How do you feel Boston fits into the national scene?

Right now, I think Boston performers are giving some of the most killer five to seven minute showcase, television, and accessible sets in the country. And I think that that is a testament not only to the Comedy Studio and their format but just the various venues around town and the development of the various extremely smart and cool comedians from all over the area.

What do you see in the near future for Boston comedy?

I think it’s just going to keep getting better and better. I think that right now is a great moment for comedy in the world and in television and in all media. And I think that it’s just going to continue to churn out the kinds of talent and the generations of brilliant voices that it has for a really long time now.
Posted by Unknown at 2:04 AM