This month at Discount Variety we have two good friends, Tim McIntire and Brendan Boogie. McIntire is a stalwart of the Boston scene, someone I first came into contact with when I wrote a piece about Bill Hicks for Playboy.com. I had just moved to Boston, and McIntire e-mailed me about it and told me I should come to the Comedy Studio to see his Thursday Night Fights. That became a regular haunt for me as I covered the local scene. Brendan (I can’t bring myself to just call him “Boogie”) I met a year or so ago, and had the pleasure of playing on a show with him in February. We traded bits of Elvis Costello cover tunes waiting for our time to go on, where he gave me his great rocking pop EP Disposable Pop. See him solo acoustic at CinemaSalem Café tonight! 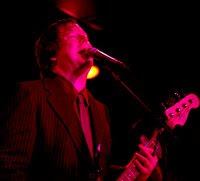 Brendan Boogie played bass with the Boston power pop group Scamper until they were all eaten by alligators. After being rebuilt by science, he started his own outfit Brendan Boogie and the Best Intentions. Brendan's full-length follow up to 2008's Disposable Pop EP is set to fill up your earholes with gooey goodness this December.

I started with Scamper in September 2004. Before that, I sold my bass and rig to finance an ill-fated trip to LA to pursue a career as an obsolete reality show contestant.

I find Ann Coulter hilarious. Whoever is playing her is a brilliant comic performer. Locally, I find the Jim Henson puppet they call "Mayor Menino" pretty good.

I might have dreamed this, but I saw Tim McIntire and the Walsh Brothers open for Louis C.K. at the Comedy Studio one time. My spleen hurt from laughing so much. 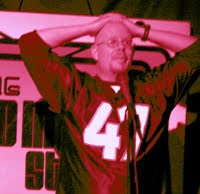 Tim McIntire has been one of the most prolific comics in Boston for nearly a decade. He began his career in Colorado and honed his act on the road, working every comedy club, roadhouse, and speakeasy between California and Pennsylvania. After moving to Boston to move in with a hot girlfriend—who would eventually become his hot wife—he quickly became a fixture in the comedy scene, gaining notoriety for his Thursday Night Fights at the Comedy Studio, his edgy hosting job for the Boston Music Awards, and for his first comedy album, Poor Impulse Control.

Since that time, he's released a second album (Scatterbrain), written for Nickelodeon (Fairly Oddparents), been featured on National Public Radio (Special Edition with Tom Ashbrook), performed at several comedy festivals (Boston and Chicago), and appeared on TV (Comcast Comedy Spotlight). The Boston Globe has called him a "comic on the verge of stardom," and the Boston Herald has called him "a breakout comic to watch." He is currently seeking representation for his first novel, Suicide Lane. In the little free time he has, he likes to fish—for trout, not bass, because he went to college.

Since 1996. I moved here, and my first gig was an open mike at Daisy Buchanans. It was such a bucket of blood that I considered moving away immediately.

Well, at the risk of seeming too self-promotional (a concept musicians may be unfamiliar with), I love playing at my own club, Mottley's. I don't know how or why, but I kill there like no place else. The Comedy Studio is a blast, too. As far as non-comedy rooms go, I love doing the Lizard Lounge, even though the layout is weird for comedy.

Locally, I love the Grownup Noise, the Rationales (and Dave Mirabella by himself, too), the Motion Sick, The Wrong Reasons, and my man Brendan Boogie (who in addition to being very talented is also the only guy in Boston I've been able to talk into going fishing with me). Nationally, I'm crazy about Cory Branan these days. I also love Drag the River, Scott H. Biram, and Todd Snider. I'm also on something of a Keb Mo kick. And I am a totally unrepentant, non-ironic, and lifelong Blue Oyster Cult fan.

Nick Cave and the Bad Seeds at the Roxy back in 1998. Transcendent. Absolutely transcendent.
Posted by Unknown at 12:51 AM