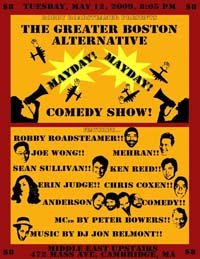 Robby Roadsteamer has created a franchise in Boston with his Greater Boston Alternative Comedy shows, gathering his favorite comedians and a band or two and putting on shows at venues like the Paradise and the Middle East (see my interview with Roadsteamer from the first show in December). Tonight, he brings the Greater Boston Alternative Mayday! Mayday! Comedy Show to the Middle East Upstairs with Joe Wong, Mehran, Erin Judge, Ken Reid, Chris Coxen, Anderson Comedy, and Sean Sullivan.

The shows have fostered a sense of community, which Roadsteamer immediately looked to showcase in a new YouTube-based sitcom called Quiet Desperation (see the first three episodes below). I caught up with Roadsteamer last week to talk about the shows and the Boston comedy monster he’s creating.

How have the Greater Boston Alternative shows been going?

Personally, for me, they’ve been a blast, just because it’s definitely an audience that doesn’t normally go to a comedy club. I, with the exception of shows at the Comedy Studio, have been burned out by conventional comedy shows. It’s nice to have a crowd that’s just open to anything. A lot of times, crowds at comedy clubs are, “make me laugh,” there has to be much more give onstage to win them over before you can actually enjoy doing your set.

These last couple of shows have been people who don’t normally go to comedy shows. A lot of them usually go to music shows and like that. There’s a much looser [feel to] the audience. You can tell it’s going to be a good show. And the comedians, I’ve seen some unique performances at these things, because they just open up a little bit. They don’t have to be delivering every ten to twenty seconds. They can take their time telling stories and developing other things onstage.

How are you pulling those audiences into the shows?

I’m pullign them a lot from basically the music side of the tracks. At WBCN, I built up a fanbase of people from all walks of my creative life. I usually do a lot Facebook blasts and things like that. But I know these people are all… it’s very hard to get people to shows these days. Everybody always flyers and stuff, but really, even shows I’ve seen a lot of flyers for, I can still name everybody in the audience at a lot of these shows.

People’s time is very valuable apparently now these days. You’ve got to fight for them to not go home and update their status and all that. The only way to get to those people is to go on their little thing and be like, “Hey, I know you’re on Facebook right now, why don’t you go out to a show? I know that comedy shows sometimes suck, I know sometimes you have to be quiet for two hours, but there’s a bar right in the room and everybody’s going to have fun and it’s all a bunch of people that you know.” It’s turned into a thing where, yeah, people see great comedians, but it’s also a social group, too. It’s people who normally are awkward, people who are kind of withdrawn, I mean, myself indictable.

I’m having a lot of fun with these shows, and I know these shows are gaining a lot of momentum. We’re, after this, doing a three-night stand in Provincetown this summer at the Arthouse Theatre. They’re bringing the whole show down there. And I actually just opened for Jon Lejoie last week at the Wilbur Theatre –

Oh, I absolutely crushed. I was not nervous and I realized I feed better off of, when I know there’s a lot of people in the room. It made me step it up. Bill, the owner of the Connection came up afterwards, he wanted me to bring the Greater Boston Alternative Show there for September. So we’re negotiating that now.

I’m really starting to enjoy the vibe, because the first time I did it at the Paradise, I don’t know, I think a lot of people were wondering what it was all about. I think comedians are starting to realize that, yeah, it’s not about the term “alternative comedy,” it’s just about the idea that there can be a different sort of platform for people to go to a show and not expect a typical comedy show.

Do you have an overall plan of what you’d like to see happening as you do more and more of these shows?

There’s already some comedians from this sort of vein starting to get breaks here and there. Maz Jobrani for Mehran, had him open up at the Berklee Performance Center. And that’s because one of the talent scouts came to the Paradise show. And in return for that, Mehran opened up for him in Washington D.C. and crushed in front of 1600 people, and they want to bring him on tour. And it’s like, what I’d like to see is comedians I’ve seen rough it out in the trenches of the Emerald Isle and all these crappy open mic nights have their chance to shine and have their breaks, because I feel they’ve got so much to offer, but they need the right opportunities.

This goes beyond just doing the comedy shows for me. It’s like that show I sent you this morning, Quiet Desperation. I’m using the same pocket of comedians to show how they would be in an outside of the box TV show that pretty much lampoons the whole Spinal Tap meets the D.I.Y. scene and stuff like that. I want it to be across the board, because these people, I don’t just talk about comedy with. We’re all sort of intertwined with other things, too. It could be philosophies, the way we enjoy life. It’s so weird how, accidentally, all these comedians turned out to be really close friends. I could tell you stories on everybody who does these shows. Like, how I met them and what I’ve shared with them. And it’s weird that I also happen to find them amazingly brilliant onstage.

I just actually last week closed the deal, I guess MTV’s putting together another Beavis and Butthead type of show, and it’s going to be based on YouTube videos and stuff like that, and one of their people approached my publishing company and they’re paying us a thousand dollars per episode, I mean, it’s one right now, but if people like the videos, they’ll purchase for other episodes for permission to use all the YouTube videos on each episodes.

Going back to Quiet Desperation, is that just made for friends and people in the scene? It seems like a lot of stuff would fly over people’s heads if they’re not into the local comedy or music scenes.

My opinion is this, I think you show it to anybody in terms of the type of character Tom Dustin is, the type of character Mehran [is]. Yeah, we’re using local locations and stuff, but I don’t expect somebody to gut laugh when they hear somebody performing at Great Scott. And I don’t expect people to gut laugh when they see Erin Judge is reporting for the Boston Globe, but somebody performing at a sports bar in front of five people after I’ve just explained how much that sucks? There’s not, I fell, a lot of inside.

It’s the type of show, it’s like It’s Always Sunny in Philadelphia or Arrested Development. I think on its own as a YouTube video, I don’t think it holds its own, because those types of shows, you need to watch them. That’s going to be our only handicap. I mean, I know it’s not going to be a five to eight million hit video because people just want stuff on YouTube to make fun of, the retarded kid who can’t sing Madonna’s “Like a Virgin” the right way.

With a video like this, I feel like if it were budgeted it would be perfect for something like MTV. You’re looking at ten to twenty fake bands of all different genres doing really close to the bone reality comedy songs in each of those genres in that Spinal Tap meets D.I.Y. mode. How many people are struggling musicians trying to pretend they’re bigger than they are in this country? How many people eon the comedy side really have these dreams and visions, too? It’s a lampooning of how a lot of us are living this life of, “Oh god, I really don’t care about the break, but I need it!”

I feel the jokes and the humor, if you give it a real, unbiased watching, I feel the talent is top of the line, the delivery’s top of the line, you don’t feel stupid for watching it. I think the acting is very convincing. And I think more and more, now that we’re getting episodes out and telling the story a little bit more fluidly, there have been a few bites and breaks. The Phoenix is going to host all the newer episodes, including the ones we’ve already got printed up.