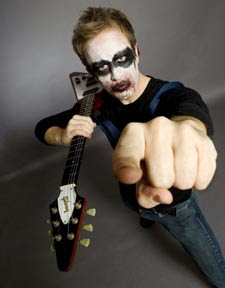 If you're looking for a comedy show tonight, you're loaded with great options. First off, Berklee grad Brandon Small of Adult Swim's Matalocalypse is at Showcase Live tonight with the School of Rock All-Stars paying tribute to... the Bee Gees? Small will do a Q&A to start the show, and then give way to Tragedy, an ensemble Showcase Live touts on their Web site as "The #1 heavy metal tribute to the Bee Gees." I imagine it's not a terrible crowded field. The All-Stars are also slated to join Small to play some Dethklok tunes and a few assorted metal classics. Show starts at 7PM.

If you don't want to drive out to Foxboro or metal isn't your thing, head out to the Lizard Lounge in Cambridge for the Spring Fever show with the Steamy Bohemians, Goli, and Emperor Norton's Stationary Marching Band. It's been a while since the Steamies have played the Lizard, and this should be an interesting show. Members of all three musical groups will sit in on each other's sets, and the Steamies are doing a full hour, with a drummer. Show begins at 8:30PM with a vrigin sacrifice.

Also tonight, the second installment of Jonathan Katz's One Man, Many Games at ImprovBoston. I spoke with Mr. Katz before last week's show -- read the interview here. Show starts at 7PM.
Posted by Unknown at 12:21 PM