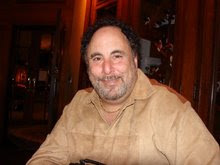 If you look at the schedule for The Comedy Club in Melbourne, Australia this week, you’ll find this listing – “Direct from the U.S.A., 2008 sell-out sensation Rich Ceisler.” In case you’re wondering, that’s Boston comic Rich Ceisler, and he’ll be in Australia most of April playing in Melbourne during the Melbourne International Comedy Festival, and then the Comedy Store in Sydney during the Sydney Comedy Festival in the beginning of May.

Ceisler himself is a bit more humble in describing his Australian mini-tour. A couple of years ago, Ceisler was working a cruise ship gig that brought him to Melbourne. He stuck around and did a few gigs at the Comedy Club, and they asked him to do a stint during last year’s Festival. They were impressed enough to ask him back this year for another extended run.

So do Australian audiences know this Boston comic?

“A little bit, just by virtue of the fact that I did it all month last year, I should have some people,” says Ceisler, who is blogging about his trip at www.richcomedy.blogspot.com. “But at the end of this year, hopefully between the two years I’ll have a following and be able to parlay it into something. I was able to parlay this year into the Sydney one. And hopefully by next year maybe I can parlay it into getting into the one in New Zealand.”

The club seats 400, and the Festival brings a steady flow of foot traffic. “I know the club’s going to be sold out every night,” says Ceisler. “It’s going to be packed every night [because of the festival]. That’s what happens.”

Playing the cruise ship circuit for fifteen years has made Ceisler shape his material differently. He says he’s written some stuff specifically for Australia, but otherwise, he has to be a bit more general. “No political, no stuff on sports, no news stories,” he says. “It’s more personal stuff about me, which is timeless and international so I can do it anywhere in the world.”

“You can still do some pop culture references, you just can’t make it too specific,” he adds.

He’s also played China, England, and Canada within the past couple of years, which makes his transition easier. “I’m sort of used to the international crowds,” he says.
Posted by Unknown at 6:11 PM