Sue Costello returns to Boston with Minus 32 Million Words 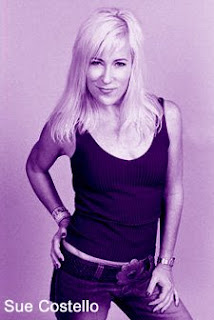 Seeing the ruckus the diminutive Sue Costello can kick up onstage, it’s hard to believe that she ever struggled onstage. But the Dorchester native was a theater major before she was a comedian, and had to work up the nerve to be herself onstage. Once she get going, though, she was never short on nerve again. She once had her own sitcom, which Fox canceled after a few episodes. Tough to take, but it toughened Costello up, perhaps enough that she started to look at herself with the same withering sarcasm she looks at others, leading to her one-woman show, Minus 32 Million Words. Now based in New York, Costello brings her show to Right Turn Live in Arlington Friday and Saturday. You can also catch her at one of her old haunts, Dick’s Beantown Comedy Vault, tonight.

Growing up, what did you find funny?

Bill Cosby albums made me roll around the floor laughing in my feety pajamas.

When did you decide you wanted to be a comedian?

Ever since I was a teenager, people would tell me that I should do stand up. I never had the guts, I couldn't even step foot into a comedy club until I played a hooker in a play at UMass Boston. Everyone was hysterical.

The sad part was that I was being serious. So, my friend signed me up for a comedy competition at Duck Soup. The scores went from 1 to 10, 10 being the best I got 2's in everything but a 10 in stage presence. I was hooked.

What were the clubs you started in here?

Dick Doherty's Comedy Vault, Duck Soup, Nick’s Comedy Stop and the Comedy Connection. Back when I started, the headliners would host the open mikes and they would give us pointers. Billy Martin told me that all I had to do to get my stage legs was to stay on stage for 5 minutes no matter what. So one night, these big Italian guys yelled "You Suck, Get Off the Stage!" And I responded with; "I know I do, I just have to stay up here for 5 minutes!"

What made you write Minus 32 Million Words?

I was going to die if I didn't express what was inside of me.

Was it harder to look at yourself in a show like this than to riff on other people?

Yes, the show is all about going inside; to find out who I was born to be, by removing all the things that others told me I was. I had to go through a lot of ugly feelings but I would do it 32 Million times again if the way I feel now is the reward.

Are you nervous bringing the show back to your home town for the
first time?

YES!! OMG YES; did I mention YES? I am really being honest and vulnerable with my show, there is no hiding, so yes, but it's okay, that's part of the electricity that comes with being and artist and exposing yourself. And, I am very, very proud of it.

How did New York audiences react to it?

Really, I was overwhelmed with the response from all different types of people. I just wrote the story of my life and how I experienced it and people really identified. It's really a story about humanity; it's so personal, it's universal.

Do you still have family here? Will they be at the show?

If you could go back and do anything differently when you had Costello, would you change anything? Do you think the show got a fair shot?

I wouldn't change a thing, because it was a necessary experience in my maturation process. Without it, I never would have become the person I am today.

What are you working on once this show is over?

This show isn't going to be over for a very, very long time.
Posted by Unknown at 3:54 PM