Video: Maria Ciampa on the Women in Comedy Festival 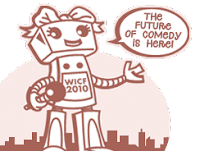 Maria Bamford and Jackie Kashian are headlining with a show Saturday (Bamford will also host the free afternoon open mic on Saturday). The All Girl Revue, with Edie McClurg (remember the secretary from Ferris Bueller?) and Jane Morris (founder of SEcond City's ETC stage), plays the Festival Friday and Saturday. Bonnie McFarlane is on the storytelling show Saturday with Sara Benincasa and Robin Gelfenbien.

And that's before you count locally-bred talent like Giulia Rozzi, Kelly MacFarland, Jessica Sutich, Jenny Z (as Liz Fang), Somebody's In the Doghouse, Naughy Nanas (an over-50 improv troupe), Michele and Micah, and Josh Gondelman (the Festival's lone male stand-up). For a full schedule, click here.

I caught up with Ciampa last week at ImprovBoston to talk about the WIC Festival 2010. Here it is, with a minor edit.