Out Today: Shane Mauss, Jokes to Make My Parents Proud 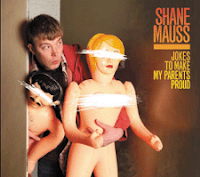 Shane Mauss often paints himself as “the dumb guy” – someone who doesn’t know a lot about sex and women, someone who likes to drink a bit too much. Someone who, let’s say, might be fooled by the future version of himself coming back after a sex change to fool him into having sex, just to gross his past self out.

You can already see, though, that Mauss’s mind works a little differently. Beneath the sarcasm and the somewhat flattened, Midwestern tone, there’s a nimble imagination, which is all over his first comedy album, Jokes to Make My Parents Proud.

The time-traveling bit is a prime example, based on something Mauss says he had heard about sex changes being more convincing and complete in the future. Mauss could have found an easy target for that premise in some gender-bending celebrity or bashing someone’s sexuality. But he turns the joke on himself, twice, with a time machine thrown in (time machines are a recurring subject on Jokes).

Mauss also has a great bit about wandering into a Best Buy when he was stoned on mushrooms. He thought it was the future. He wound up in the camcorders section. “So for about an hour,” he says, “I watched a movie about me watching a movie about me.” 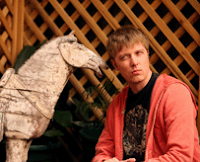 And there’s also a withering wit at work. He talks about being from Wisconsin originally (he’s been honing his craft in Boston for the past six years), and people asking him if there’s a lot of cheese there. “You bet there is!” he says, gleefully. “I can go into a grocery store, get all the cheese I want!”

There’s also his bit about his accidentally leaving an electric blanket on all day, to the frustration of his girlfriend, who says he could have burned the house down. “We’ve been sleeping in a blanket that just randomly bursts into flames?” he says. “Can we go back to the blanket that doesn’t spontaneously combust?”

With the new album up for download on Amazon.com and iTunes (you can only get physical copies at his shows), a Comedy Central Presents coming up on Friday, and a thriving touring career, Mauss is leaving Boston at the end of the month. He’s taking a somewhat non-traditional path, spending some time in Australia before heading to Austin.

It has been fun to watch him develop the material on Jokes for the past few years in Boston, and I’m sure we’ll see a lot more of him, in Boston, on TV, and on the Web, in the future. Where Mauss will be reunited with his female self. Mauss’s future is a weird, funny place.
Posted by Unknown at 4:17 PM