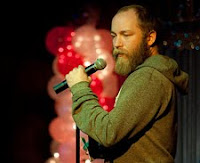 Kyle Kinane comes to the Middlesex Lounge tonight with a building buzz. He has been Patton Oswalt’s regular opening act, cropping up frequently on Comedy Central and late night talk shows, and had a small role in the Adam Sandler/Judd Apatow movie Funny People. He also has a new CD out, called The Death of the Party, on A Special Thing’s label.

But if you ask Kinane, he’d really not talk about being a “rising star” or any of the other labels with which he’s currently being fit. “I'd rather not pay attention to that,” he says. “Seems that ‘buzz’ and ‘rising star’ usually lead to "what ever happened to?" a couple years later.” His album wasn’t his idea. A Special Thing approached him to do it, and, he says, “When AST asks you to do a CD, you say yes.”

And while Funny People is a nice resume builder, it hasn’t gotten him as much recognition as his opening slot for Oswalt, where Kinane has a better chance to show off his talent. “The only people that recognize me from my five seconds in Funny People are the ones I told to look for my five-second part in Funny People,” he says. “People look me up online from the gigs with Patton though. He's got to have one of the best fan-bases in comedy. They seem to hold comedy in the same ranks and respect as music.”

If you go to KyleKinan.com, you’ll see he’s labeled his Web site “The minimal efforts of Kyle Kinane,” and there’s little more than a show calendar and a list of random thoughts. He has a blog, called “I’m dead and it’s all my fault,” on which he mostly addresses more random thoughts to a mysterious person named Doug. The latest entry from last week – “There’s no such thing as a bad neighborhood when you’ve got a purple belt in taekwondo, Doug.” Kinane describes the (fictional?) Doug as, “the unfortunate friend of a man whose ambition is second only to his incompetence.”

It would be easy to mistake Kinane’s effortless, absurd everyman humor as a sort of slacker charm, as he tells stories of his crappy jobs and getting hassled on the street by the cops in Burbank for riding his bike too fast down a hill. But Kinane has worked hard on his craft. Before he left for L.A. in 2003, Kinane was part of a group of kids in Chicago trying to develop his own style. He says there was a “large contingency” of people who were pursuing comedy as a serious career option, “just going to every show we could with as much new material we could push out.”

Kinane credits his friends back home with shaping his sense of humor. “I'm in Chicago right now and went out with people I've known since junior high,” he says.” I laugh harder with them than watching any comedy program.” He credits his delivery, which is sometimes shouting and slurry, to “booze and the frustration of having to yell over crappy audiences.”

When asked what he’s working on now, he says, “Finding new ways to kill Doug's friend. The obligatory writing packages and the sort. Making sure the wings don't fall off of it all.”

Kinane comes to Boston by way of Dan Boulger and Sean Sullivan, both of whom are on the bill tonight (along with Tim McIntire and Rob Crean). He met Boulger at the U.S. Comedy Arts Festival in Aspen in ’07 and Sullivan when the pair were taping Comedy Central’s Live at Gotham last year.