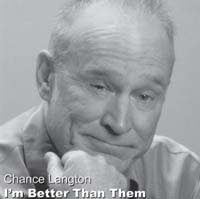 Veteran Boston comedian Chance Langton is what I would call an ellipses comedian (that’s right, I just made up a category of comedian). His jokes aren’t technically one-liners, but he has that same quick punch – a line or two of set-up, pause, then punchline.

It’s an act he’s been honing for 30 years, and the stand-up on his album, I’m Better Than Them, newly available on iTunes and Amazon.com, is a lean, efficient set.

It’s all in the timing for Langton, and you can almost count the beats until the punchline:

“I was in Vermont once… that was enough.”

“I drove 100 miles for this show, which is… stupid. Cause I live down the street. There were three accidents on the way… I was in each of them.”

“Remember that song by Gloria Gaynor, ‘I Will Survive?’ … Whatever happened to her?”

It doesn’t quite do justice to Langton’s delivery to print the jokes, but you can get a sense even from just reading them how they land. It’s a classic format, one that you could have heard half a century ago, but Langton sets it off kilter. At his best, Langton’s comedy is inspired silliness. It’s a bit puzzling, but immediately funny.

One of my favorite bits has a longer set-up, but Langton’s standards, but it’s still only a few seconds from start to finish:

“The first time I fell in love, I fell in love with Shirley Temple. I saw her on TV. I was five and she was five. I couldn’t believe. I met her at a mall when I was six… she was 50.”

Langton is also a musician (he was courted by Epic Records in the 70s as a singer/songwriter), and there are four songs on the album in addition to the half-hour stand-up set (“Live at the Capitol Center for the Performing Arts”). The title track, “I’m Better Than Them,” is a list of celebrities that Langton brags about being, well, better than. John Belushi, J.F.K., John Holmes, Jimmy Hendrix. If you’ve spotted ther trend there, you’ve also spotted the joke – they are all dead. Which is how Langton comes off better.

It’s a simple gag, and unlike Langton’s quick-hit jokes, it wears out its welcome after a minute or so. The same is true for “The Laugh Factory,” which seems like a goofy commercial for the Los Angeles comedy club of the same name.

Langton is much better with the loonier “One of the Elves,” a waltzing folk ballad sung by Langton in a helium-tinged voice. There’s an inscrutable kind of melancholy to it, as he sings, “Maybe I’m the monster who’s afraid of himself/Because when the end comes I’m just one of the elves.”

And then there’s the somewhat more straightforward “I Want to Make Money,” a midtempo acoustic rock song about a working stiff daydreaming through the job and hoping for something better. It’s the best song on the album from a musical standpoint, with an assist from “Weird” Al Yankovic’s band (bass player Steve Jay, drummer John Schwartz, and guitarist Jim West).

On a regular folk album, “Elves” and “Money” would be more conspicuous in their oddity. But next to Langton’s stand-up, they seem a bit more subtle.

The best way to hear this stuff is live (Langton is at Nick’s Comedy Stop tonight and tomorrow), but I’m Better Than Them gives you a good idea what you’re in for.
Posted by Unknown at 1:25 AM