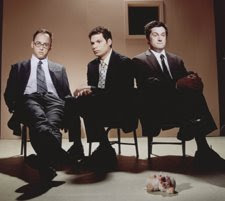 David Wain, Michael Showalter, and Michael Ian Black first started working together as part of the State in the late 80s in New York City. They debuted as Stella at Fez in New York City in 1997. All three live and work in New York. So that would make the obvious place to tape the new Stella live DVD… The Wilbur Theatre in Boston.

The individual members of the group had only a small window to pull something together before they got back to their regular schedules, and booked a short two-week tour schedule, which give them few options. So producer Jon Stern came out to Boston to scope things out, and the plan came together. They will tape the special at Thursday's show.

“We wanted to do it toward the end of the tour and we wanted to do it somewhere cool,” says Wain. “We thought Boston is a great place. We didn’t want to do it in New York where we all live. It just seemed less exciting.”

Stella has had a deal in place with Shout Factory for a while, according to Wain, and wanted to get their live show on tape. “We have DVDs of our shorts and of our series, but we never had one of our touring show,” he says.

Black, Showalter, and Wain have all been working on other projects for the past year and a half. Black has a new book, My Custom Van, and has a new children’s book coming out in January. Both Showalter and Black have worked on pilots for Comedy Central (they have a new one, Michael and Michael Have Issues, on tap for the network). And Wain has been promoting Role Models, which he directed.

For Wain, performing with Stella onstage is a welcome change from the grind of working on a feature film, where a joke might take four years to get from a script to an audience. “The changing of gear is life-saving for me in my creative mind,” says Wain. “I was so emotionally and mentally exhausted after doing the movie, so this is a complete shifting of gears. Better would be a vacation, but that didn’t happen.” 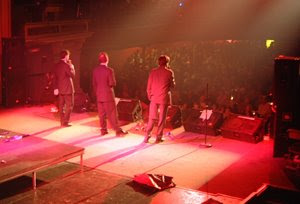 Wain won’t direct the new show – he’ll be too busy onstage, and directing a live performance DVD is a different skill set than directing a feature film. Stella is also a very improvisational act, which makes Wain curious about how it might come out, especially since they essentially have one shot at it.

“If we had the budget I suppose we’d do what U2 would do and shoot like ten shows and then edit them together as if they were one,” he says. “But the DVD viewers will see an authentic record of this one show.”

Wain says Stella has been doing almost all new material on the tour, with some musical and multi-media elements. Since they are taping here, the Wilbur show will be a bit different. “At the Boston show, we’ll be doing a slightly longer show, including some quote-unquote classic material because of the fact that we’re doing it for the DVD,” he says.

The troupe will also bring back Eugene Mirman, who started out in Boston and has been opening for Stella since their first tours in 2003. “Quite simply, we just think he’s funny,” says Wain. “He’s a little offbeat like we are. So the people who like Eugene will like us, and vice versa, in theory. It seems to have worked well.”

The live DVD is expected to come out sometime in the first half of 2009. State fans should also look for a reunion show next month in San Francisco, and there are rumblings about a new State TV special.

Wain is also at the beginning stages of a couple of new film project, which, in all likelihood, will involve his Stella or State-mates. “Pretty much everything I’ve done has been an organic like configuration of friends, usually with some group of people from the State,” he says. “One day I might work with people outside the State, who knows?”
Posted by Unknown at 5:33 PM

I recently came across your blog and have been reading along. I thought I would leave my first comment. I don't know what to say except that I have enjoyed reading. Nice blog. I will keep visiting this blog very often.