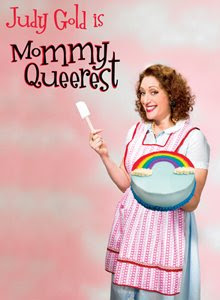 Last year at this time, Judy Gold was in Boston with her one-woman show, 25 Questions for a Jewish Mother, playing the Huntington’s Calderwood Pavilion. But there was another show brewing she couldn’t quite finish off, at least until Peter DuBois, the Calderwood’s artistic director, asked her if she wanted to bring her next show back to Boston.

A year later, she’s back in Boston with the premiere of her new show, Mommy Queerest, which might still be in the limbo world of development if she hadn’t booked the Boston date. “I had been working and working on this and it gave me a deadline, which is always the scariest thing in the world,” she says.

Where 25 Questions was more of a play with laugh lines and poignant moments, covering the experiences of more than 50 women, Mommy Queerest is Gold’s own story. And since Gold is a stand-up comic, naturally, her own story is all about the laughs. “It’s very, very different,” she says. “Mommy Queerest is a lot of what people know me for, stand-up and storytelling. It’s really what I’ve done for the past twenty-plus years. It’s about being a gay mom and growing up with my mother.”

Gold is a gay mother of two living in New York, and the theme of gay marriage, she says, is prominent in the show. You can’t talk about being gay and having a family without the creep of politics, especially in light of the various anti-gay marriage propositions in the last election. Gold addresses that, but would prefer to keep the focus on family dynamics.

“It’s funny, because you hear about how gay parents are going to poison their kids and make them gay,” she says. “Well, I came from a mother and father, and as far as I know, most people came from a traditional, quote-unquote, family. And gay parents do not typically have gay children. Once people realize it’s not a choice, it’s the way we are, the way we’re born, and that everyone needs to realize that they know and love a gay person, whether or not they want to admit it.”

After the show’s Boston run, Gold will take Mommy Queerest on the road while still booking dates for 25 Questions. “I’m so proud of that,” she says. “I want to bring it to as many places as I can. I love doing it.”

Gold is also planning a variety show with Lea DeLaria for Provincetown this summer. The two have been working on it as their schedules allow, and will revisit the concept, according to Gold, after the first of the year. “We really would love to bring a variety show to Provincetown, so people can see something new, you know?” she says. “There’s a lot of drag shows and there’s a lot of comics, but this would be something a little more dimensional.”