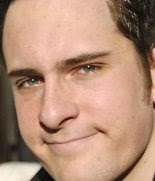 Jon Rineman has assembled an exhaustive list of his Best 50 Jokes of 2008, covering politics, entertainment, sports, and a few other catagories. Rineman, who shares my longstanding frustration about the treatment of Scatman Crothers in The Shining, tees off on the usual suspects(Sarah Palin, Manny Ramirez) like a man obsessed with rimshots. He even includes his top ten worst jokes. Brave move, Mr. Rineman.

If you want to see Mr. Rineman live, you're in luck. He's playing a New Year's Eve show at Shea Theater in Turners Falls, Ma with Rich Gustus, Chrissy Kelleher, and Sean Sullivan, hosted by Jennifer Myszkowski. Tickets: $20.00 all seats; Doors open at 7:00 PM
Posted by Unknown at 12:10 PM