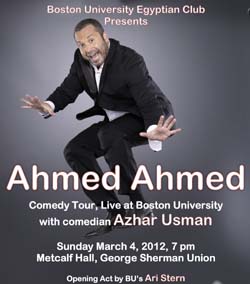 Ahmed Ahmed of the Axis of Evil Tour is coming to Boston University's Metcalf Hall on Sunday, with Azhar Usman and BU's own Ari Stern. The show is sponsored by the BU Egyptian Club, but it's open to the public, and according to the Facebook events page, proceeds will be donated to Egypt Cancer Network to support the construction of the extension to Children's Cancer Hospital-Egypt, the world's largest pediatric cancer hospital.

Ahmed, who was born in Egypt, directed a documentary in 2010 called Just Like Us: A Celebration of Culture and Comedy, which is currently available on demand on some cable packages. Among other themes, it explores the idea of stand-up comedy in the Middle East. Stand-up is a young artform, even in America. The modern conception of it as one person with a microphone talking about their own point of view really started to emerge in the 1950s. It's fascinating to me to think of how strange the idea might be in other parts of the world. Watch the trailer for Just Like US below.

Ahmed will also kick off his new podcast, The Ahmed Ahmed Show, on March 14, releasing a new one each Wednesday at noon PST.

For those who can't wait to see him, I am told Ahmed will be making an appearance at a Boston-area club on Saturday. Don't want to undercut BU's show, so I won't reveal which one.

Just Like Us - Official Trailer from Cross Cultural Entertainment on Vimeo.
Posted by Unknown at 1:56 AM

Go buy now on iTunes and other fine online retailers for only $ .99 cents!!

Check out the music video now on youtube!!
http://www.youtube.com/watch?v=X06H7IVEbAY