Tonight: Worried All the Time Premiere at the Armory 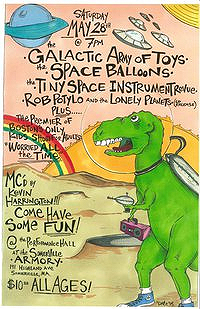 Rob Potylo and Metropolitan Pictures pulled Quiet Desperation from MyTV this week. They never got the chance to do the same with the children's show, Worried All the Time. They shot a pilot for it, and MyTV didn't pick it up. According to Potylo, the network was worried about a lot of the same people from Quiet Desperation being involved in a kid's show. Tonight at the Armory in Somerville might be your only chance to see the whole thing.

The night is being billed as The Premier Of Boston's Only Children Show For Adults: Worried All The Time and will feature performances from The Galactic Army Of Toys (featuring members of Walter Sickert And The Army Of Broken Toys), The Space Balloons (featuring Michael Epstein and Sophia Cacciola), The Tiny Space Instrument Revue (featuring jojo and a visit from various projections of Mefflike beings), Eliza Rickman, The Frog, and of course, Rob Potylo And The Lonely Planets. Kevin Harrington emcees.

Here are a couple of preview videos:

Walter Sickert and the Army of Broken Toys:


The Space Balloons, "The Mustache Song"