Music and Wrestling: King Hell and the Boston League of Women Wrestlers at the Middle East tonight 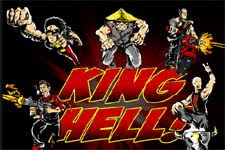 Former Boston comic Sam Walters is back in town tonight with King Hell, his New York-based funk metal outfit. They're playing the Middle East Upstairs, paired with B.L.O.W.W., the Boston League of Women Wrestlers. King Hell are a theatrical bunch - you can count on seeing Walters headbanging standing on an anvil and probably thrusting a pitchfork skyward at some point. But how did they get tangled up with wrestlers?

"Our space alien brothers in the intergalactic band Planetoid gave us B.L.O.W.W.'s coordinates," says Walters, "which is probably the strangest true sentence ever written."

On their Facebook event page, the band bemoaned the passing of an era in pro wrestling when the participants had colorful names like Super Fly and Junkyard Dog. So they've suggested a few new names, like Deformo the Homunculus.

So would Deformo be a good guy or a bad guy?

"Deformo The Homunculus is all things to all people, like Abraxas," says Walters, "except he blinds opponents by flinging hot oatmeal in their eyes. In that regard, he's quite singular."

The action starts at 9PM at the Middle East Upstairs.
Posted by Unknown at 4:32 PM

I love music. What are the ringtones you are using? I have the best quality free ringtones music collection 2018. Unique ringtone. Hot ringtones. Here are the most recently downloaded songs:

Also you can refer to many other genres of music at my homepage here: ringtonedownload

Thanks for this post. I definitely agree with what you are saying. I have been talking about this subject a lot lately with my father so hopefully this will get him to see my point of view. To see How to Change Route IP Address?,
Please check link 192.168.l.l