Eddie Brill at The Comedy Club at Cheers 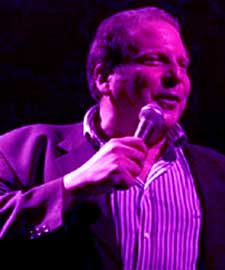 Eddie Brill is a New York guy, but he has a special place in his heart for Boston. Brill, who books comics for David Letterman, went to Emerson College and worked on his chops here in his early days. Now he gets back for gigs like his two-night stand at The Comedy Club at Cheers, tonight and tomorrow, and to look for talent for Letterman. “Some of the best comics in the world are from here,” he says, speaking last night from his hotel room in Boston. “If I didn’t come here to check out the comics in Boston, I’d be a fool.” He booked Joe Wong for his debut this past April, and worked with him on his set. Brill also teaches comedy, and he’ll be teaching three days of seven-hour workshops at Emerson this weekend.

How often do you get back to Boston, do you think?

Probably about three to four times a year. I’m always here looking for comics for the Great American Comedy Festival. I’ll try to do a Letterman audition up here, as well, but sometimes they’re the same thing. And I always teach at Emerson once a year, and I come up once or twice a year to do gigs or corporate work. That kind of a thing.

What are the workshops on, in particular?

It’s a comedy workshop that I created about ten years ago. I’ve been doing the one-day, very intense workshops for seven hours. And I’ve done it all over the world now, in Australia and England and Ireland, and all over Canada and the United States. It’s been very, very successful. It’s really about comics being honest with each other and helping each other, being each others’ eyes and ears. I’ve got it down to a science where it’s really effective.

So a few years ago I presented it to Emerson, and they let me do a weekend. It was so successful that we’re into our third year in a row.

Who is it aimed at? College comics or –

No, I’ve done workshops with ten people and eight of them have been doing it for sixteen years, plus. Comedians are nice to each other, but it’s really hard to be honest with each other because there’s a lot of ego involved. This is a situation where people have been given the okay to really be honest with each other in a respectful way, and you can help each other and be each others’ eyes and ears, to point out the kinds of things that people don’t know about themselves because you can’t see yourself.

Is that the main point of it, to show people how to communicate within the comic community?

Naw, that’s only part of it. The key is, I learned more from teaching when I was at Emerson than I did from doing. So I created a workshop where everyone is a teacher. Everyone learns so much about what they do by seeing what others do.

How much of that is stuff you learned since working on the Letterman show?

Hmmm… I don’t think I’ve learned that much. I have learned about what we want at Letterman, but that’s something in addition to what I’m already doing. It’s pretty much a different hat. And I’ve always loved teaching and I will admit I’m pretty damn good at it. I’ve always been very good at being that kind of person. Been doing it or a very long time and I’ve had hundreds and hundreds and hundreds of students, and a lot of them have been in touch with me and a lot of them have been inspired, not only to be comics but to be writers, and they learn a lot from them. So it’s been very, very good. There are people who don’t ever do it again, but they appreciate it. And then there’s people who never thought about doing it and begin doing it.

It’s very tricky. What happens is, the kind of cool thing is, word has gotten around to trust me, that I’m not going to let anyone go up there and do anything that would make them look bad. Whatever I talk to them about will only be, will help them do better. And there have been some scenarios where I’ve helped some pretty top-name comics with some ideas for their sets and they just loved them. What it really comes down to, the bottom line is, it’s the comedian, it’s their set, not mine. So I might make suggestions, and most of the time, these people will follow it, but they’ll do it because they’ve learned to trust me.

Was it harder at the beginning, when you don’t know as much as you do now, when you first started the job?

I had booked before, a had booked a comedy club and a couple of shows, but this was booking for someone else’s taste. And interestingly enough, we have similar tastes. We both like the same kind of funny, which really is helpful to me. He also has a lot of integrity, Letterman, where he doesn’t care if anyone is big, he just cares that they’re funny. That’s a really great boss to work for, who’ll put comics on because they’re really great at what they do, not because they have a big name and you want to get ratings. He just wants the comics to be great. He’d rather find a young comic that no one knows about, instead of finding someone who already has all that power.

Are you currently looking at anyone else from Boston, or working with Joe again?

Definitely going to do something with Joe again in the new year. I like Dan Boulger. I like him a lot, I could see him eventually have a set for the show. There are so many great comics in Boston, and each time I see the groups from Boston, they improve all the time because there’s so much work here.
Posted by Unknown at 2:56 PM