Ken Reid makes Music To My Years tonight at Mottley's 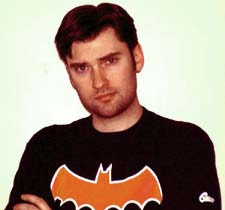 In a post-apocalyptic world, Ken Reid is the guy you need to preserve to remember all of human history. Well, maybe not all of it, but certainly anything to do with modern movies, music, or television. I have often told Reid about some obscure movie I saw on a Sunday afternoon, something I watched for a laugh, just to have him tell me when he saw it in the theater during its original run. Far from just parroting this stuff in his stand-up act, Reid makes it all personal, and hysterical. Tonight at Mottley's Comedy Club, he presents his third one-man show, Music To My Years.

You’ve talked about TV (A Very Special Episode) and movies (Cusack Attack), does a show about music complete the circuit for one-man shows for you?

I was actually thinking about this yesterday, when I first started writing the first show (Cusack) I thought that this would be the trilogy and that it would pretty much cover everything. Lately though as I've sort of been finding a good rythem with these shows I think there's a couple more in me. I was thinking of stories I have about slightly larger topics like school, horror and work and I think I could probably work shows around those topics.

Just how personal a subject is music for you?

Like most popular culture, it's very personal for me. But I think music is personal for most people even if they don't realize it. I tie a lot of my memories and specific times, places and events to specific songs. Songs act like pnemonic devices in a lot of ways for me. I spent most of my teen years in rock clubs and reading about music and hunting down records so it was a major part of my formative years. The first real experience I had with business and performing was all music as well even though I am in no way shape or form a musician. But I think if i hadn't been in a band, I probably wouldn't be doing stand up comedy now.

Would you consider yourself a music snob? Is there a style or genre of music at which you turn up your nose?

I am a music snob. But I don't think there's a genre I dismiss or turn my nose up at. Actually that's not correct. Reggaton.

Will you be playing music or videos for illustration at this show?

I always do a power point slide show with these shows. I feel like it adds some jokes and also keeps people from getting bored of me talking for an hour and gives them something to look at other than my mug. There will be some music involved with this show. I was going to include some video footage of my old band but decided against it, people can look that stuff up on Youtube after if they want laugh at my expense.

You’ve had brushes with a lot of notable musicians – how do you wind up coming in contact with these people?

That's a question I ask myself a lot. I've somehow managed to encounter a lot of "celebrities" and gotten myself into some strange situations over the years. I think most of it is just dumb luck. Some of it was just the company I kept and the places I was hanging out. The band I was in did fairly well locally and a lot of our peers got very big, so that helped. I also worked at a radio station in college which helped. I actually cut a few stories out of the show because even though they were true I thought they were so weird that people wouldn't believe me.
Will you be doing this show anywhere else? Or bringing back any of the other shows?
I'd like to. The other two shows I performed at some colleges and out of state a couple times. I'm hoping to take one of the shows down to NYC at some point.
I would be remiss in ignoring Halloween in this interview – what would be your top couple of recommendations for Halloween movies for comedy fans?

Night of the Creeps - All time horror/comedy classic, comes out on DVD (finally) on 10/27

Neon Maniacs - Not an intentional comedy by any means, but one of the weirdest movies I've seen. the village people of monsters live inside the Golden Gate bridge and terrorize teenagers, also the monster dissolve in water.

Soulkeeper - Just checked this one out, it's from 2001, sometimes it tries a bit too hard with the comedy, but most of it works, and it has a Debbie Gibson cameo.

The Pit - You'll laugh watching it, because your mind needs to defend itself.
Posted by Unknown at 8:51 AM