On January 15, 1919, a giant storage tank burst in Boston’s North End, flooding the area with roughly two and a half million gallons of molasses, killing 21 people and injuring more than 150. A little less than a hundred years later, Nate Johnson figures we are ready to laugh about it.

I caught up with Johnson by e-mail to get a few more details.

What led you to write a show about the Great Boston Molasses Disaster? Are you a history buff?

Yeah, I’ve always been a kind of history nerd, especially as I’ve gotten older. The molasses flood I’d known about for a while and really wanted to do something about it-whether it was a bit or a character or video or whatever. Doing an entire show about it provided all those options.

This was actually a tragedy at the time – how do you turn it into comedy?What’s the structure of the show?

There’s a little thing I like to say-time plus tragedy equals Thursday night comedy show. It’s always tricky writing anything about something that people could potentially find offensive. But if you’re just going with your reaction-which in this case, for me, was, “Wha? Seriously? Molasses?!”, then, ideally, the audience will get that and understand the intention isn’t malicious or disrespectful. The show is structured so there’ll be bits about the actual event, broken up by comics, with the goal being that people learn about this weird thing without feeling beaten over the head by it.

How does the stand-up fit with the overall theme? Are Matt, Dan, Ken, and Lamont going to taper their sets to the night?

Of the comics on the show, I think Ken’s the only one I heard do a bit about the molasses flood and Dan has some great history material. But the comics are really there to kinda break up the show and not make it too molasses-heavy. I’m just shooting for a funny show that I’d want to go to.

How did you put Tim, Ryan, Maria, and Sean together for the sketches?

I’d had them all in mind when I was putting the show together and knew I wanted some sketch. Doing sketch at Mottleys can definitely be challenging, but I feel pretty confident because I’ve done stuff with all of them before and they know the space pretty well. Also, they can all do excellent ethnic accents that no one will find offensive. 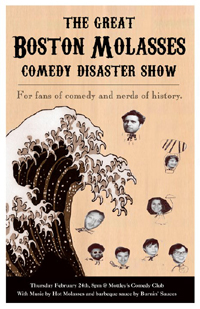 Who are the Burnin’ Love Sauces?

They’re a local saucier that makes a BBQ sauce called 1919 and molasses is an ingredient in it. It’s a great sauce and I thought it’d be fun to have them sell their stuff at the show. Plus, I don’t think there are enough shows with barbeque sauce vendors at them.

Who is Hot Molasses?

I’d really wanted a band to play at the show and found these guys online. They’re from Somerville and sound kinda like the B-52s. They’ve got a new EP coming out soon and they’re debuting a song about the flood at the show. Yeah.

Totally. I’m actually working on an operetta about the Charles Stuart murder and a 2-act play about the Blizzard of 78 performed by puppets.