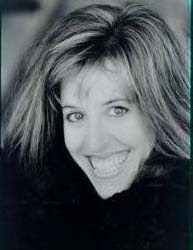 Wendy Liebman came to Boston to study psychology, and left as a comedian. She was a student at Wellesley College in the 80s when she first started taking adult ed classes on stand-up and venturing out into a Boston scene populated by the likes of Brian Kiley, Jonathan Katz, Jimmy Tingle, and Don Gavin (whose delivery was influential on her own style of rapid fire delivery and throwaway lines).

Tonight, she’s back in town at the Regent Theatre for a benefit show for Community Works, which has been called “a portfolio of 32 local social justice organizations.” She’ll be joined by Tony V, Bill Braudis, Rich Ceisler, Chris Tabb, Jim Lauletta, and Jane Condon. I spoke with her by e-mail.

How did you get involved with charity for Community Works? “A portfolio of 32 local social justice organizations” sounds a bit confusing.

Community Works is like The United Way but local. The women who started it, Kip Tiernan and Fran Froehlich are the Mother Teresa's of our time. Money donated to this charity goes to help the homeless, the sick, the needy. I love this organization and I would do anything to help them.

What is your part in the documentary The Boys: The Sherman Brothers’ Story?

My husband and his cousin made a tribute film to their fathers, the composers who wrote a lot of family music (Mary Poppins, Chitty Chitty Bang Bang, "It's a Small World," and "You're Sixteen," to name a few.) The brothers worked together for over 50 years and yet they never really got along. The tag line for the movie is “Brothers, Partners, Strangers.” I got to speak on behalf of my mother-in-law, who passed away before the movie was made. If you get the chance to see it, you should -- it's a gorgeous movie and it will bring you back to your childhood.

How often do you get back to Boston?

About once a year! I will come back every year to do the benefit for Community Works for the rest of my life (you have it in writing).

Do you still see people here who watched you coming up?

Yes. And I still do some of my old jokes. I tell them to pretend they're watching time lapse photography.

Do you keep in touch with comics like Tony V, who’s also on the bill?

Yes, gotta love Facebook! That's how I approached the other comedians to be on the show!! (Tony V., Rich Ceisler, Bill Braudis, Chris Tabb, Jim Lauletta, and Jane Condon.) Jonathan Katz and I just did a piece for his radio show, "Hey, We’re Back."

What should we be looking for from you in the future? Are you working on an album or a special?